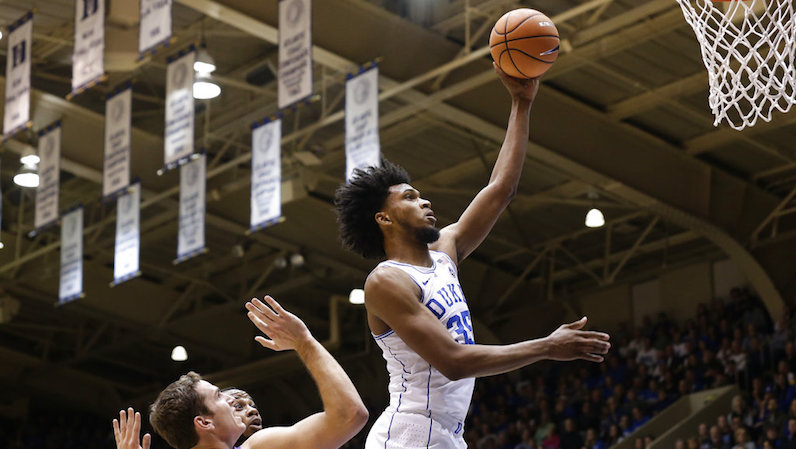 Duke's Marvin Bagley III (35) drives to the basket against Furman's Andrew Brown (5) during the first half of an NCAA college basketball game in Durham, N.C., Monday, Nov. 20, 2017. (AP Photo/Gerry Broome)

After only five games, it’s clear: this Duke basketball team is different than those from recent years. No, it’s not the loaded cast of freshman players; that’s par for the course. However, it’s how the team is playing — particularly on the offensive glass — that’s a stark contrast.

Marvin Bagley, Wendell Carter, Javin DeLaurier and even Marques Bolden are bringing the beef when it comes to cleaning up one’s own misses.

Over the last two seasons of college basketball, no team hit the offensive glass like North Carolina. UNC powered two top-10 offenses — in 2016 and 2017 — on the strength of its interior play. Both seasons, the Tar Heels ranked among the nation’s best in terms of offensive rebounding. In fact, the 2016-17 title team led the nation in offensive rebounding rate, per KenPom.

Well, it’s been just five games, but say hello to the 2017-18 Duke Blue Devils. Led by its quartet of super-talented underclassmen, Duke currently ranks No. 1 nationally in offensive rebounding rate, according to KenPom: 45.8 percent.

If this pace can be sustained, this could go down as the greatest offensive rebounding team in program history — or at least the last 17 seasons.

At the moment, there are 27 ACC players that have recorded at least 40 minutes of action so far this season, and have an offensive rebounding rate of at least 11 percent. Four of those players — the most of any ACC school — suit up for Duke.

Here’s a look at the paint production from Carter, Bagley, DeLaurier and Bolden. Included in the chart: each player’s field goal percentage on put-back attempts after an offensive rebound. As you can see, this is where Bagley’s now-legendary second-jump ability comes into play.

Bagley and Carter are two of only five ACC players currently averaging at least three offensive rebounds and 13 points per game. The other three: Ben Lammers, Torin Dorn and Terance Mann.