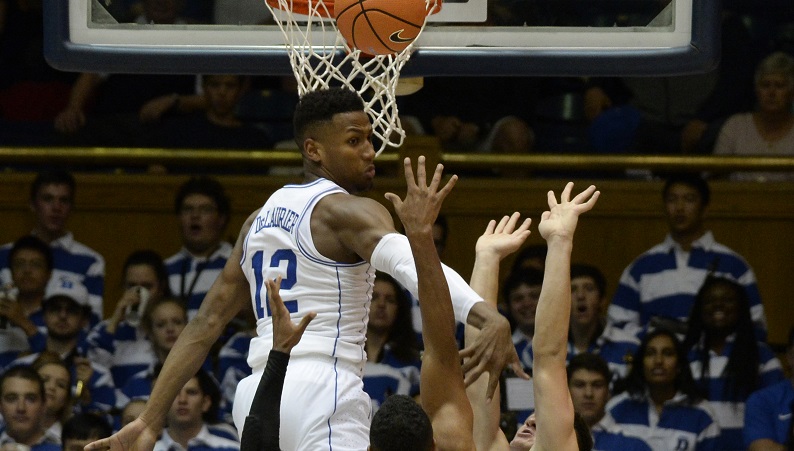 
Duke has so few players with college experience on this year’s team that Javin DeLaurier, who made all of nine shots last season as a freshman, stands out in that department.

Even though he was an afterthought on last season’s ACC championship team, DeLaurier has put himself in position to have a much larger role on this season’s Blue Devils.

“He’s as good an athlete as we have,” Duke coach Mike Krzyzewski said. “I think Javin will eventually be a pro, it’s just the process of becoming that is longer.”

Yes patience is a virtue the 6-10, 230-pound DeLaurier possesses. He’s much different than the group of one-and-dones he arrived on campus with last season. He came to Duke with Harry Giles, Jayson Tatum and Frank Jackson, who all played one season with the Blue Devils before entering the NBA Draft.

Bolden hoped to be a one-and-done, but he battled a foot injury. After he played in 24 games for Duke, getting a total of 157 minutes of play, it was clear he needed more college experience.

DeLaurier played only 85 minutes in 12 games.

Though Duke added freshmen Marvin Bagley and Wendell Carter to their frontcourt for this season, DeLaurier’s off-season work makes him a factor in Duke’s plans.

“He’s become a really good rebounder, a hungry rebounder, and he eats up the court when he runs, and he can defend multiple positions,” Krzyzewski said.

DeLaurier is a bouncy athlete who earned his defensive chops going against Tatum, now a starter with the Boston Celtics, in practice on a regular basis last season.

“I would tell him all the time that he’d just frustrate the hell out of me because I’d think I’m playing great defense and he’d just hit a shot in my face,” DeLaurier said. “With him, it taught me so much defensively not to gamble, not to cheat and sometimes, guys are going to hit shots. But it was just awesome practicing against him every day because at this point I’m like, ‘If I can guard him on occasion, there’s no one I can’t really guard.’”

In Duke’s first exhibition this season, a 93-60 win over Division II Northwest Missouri State on Oct. 27, DeLaurier and Bolden tied for the most minutes off the bench.

DeLaurier hit all four of his shots, including a 3-pointer, to score nine points. He also grabbed seven rebounds and collected two assists and a blocked shot in 18 minutes.

Krzyzewski mentioned DeLaurier as the team’s surprise of the offseason because of the improvement me made in his jump shot and the 10 pounds of strength he added to his frame.

“He’s had a great spring and summer,” Krzyzewski said.

Bagley, Carter and Bolden still appear on track to be professional players before DeLaurier. But that doesn’t mean he’s far behind them in the minds of Duke’s coaching staff.