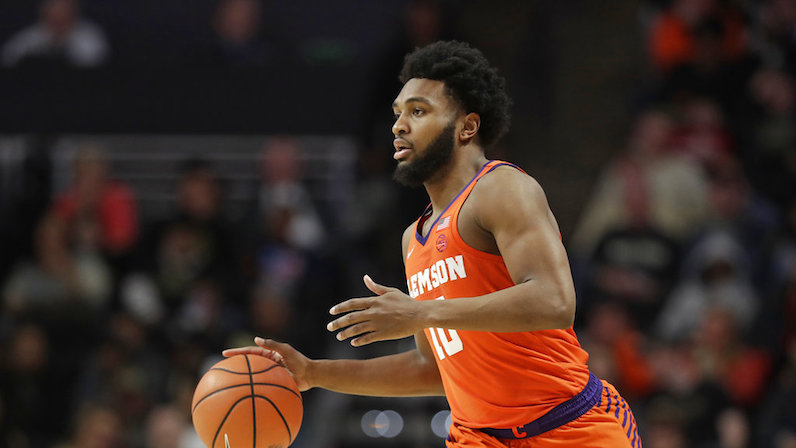 Clemson's Gabe DeVoe (10) brings the ball up the court against Wake Forest during the second half of an NCAA college basketball game in Winston-Salem, N.C., Saturday, Feb. 3, 2018. (AP Photo/Chuck Burton)

ACC basketball weekly honors are determined by a vote of a 15-member media panel. DeVoe was recognized for the first time this season. The ACC Rookie of the Week selection is third for Walker and the second for Trent. The Hurricanes’ Walker was voted the league’s Co-Rookie of the Week for the second week in a row.

DeVoe posted an extraordinary line over the past week in a home-court win over North Carolina (the program’s first in eight seasons) and a road victory at Wake Forest. Over the course of both games, DeVoe averaged 20.5 points, 4.0 rebounds and 2.5 assists while shooting 60.9 percent from the floor (14-for-23) and a scorching 10-for-15 from long range (66.7 percent).

With five 3-pointers against North Carolina, DeVoe became the first Tiger since Terrence Oglesby in 2008 to make at least five threes in back-to-back games. He extended that streak on Saturday at Wake Forest, finishing 5-for-7 from distance in a 24-point effort. It was his third 20-point outing of the season. The Shelby, North Carolina, native averaged 35 minutes played per contest and finished perfect for the week at the foul line. At one point against Wake Forest, DeVoe scored eight-straight points to combat a late push by the Demon Deacons. DeVoe’s long range sniping has helped the Tigers make at least 10 threes in three consecutive games for the first time since 1983.

Trent averaged a team-best 22.0 points, including his first career double-double, in leading No. 4 Duke in an ACC win over Notre Dame and a road loss at St. John’s. Trent poured in 22 points on 6-of-10 shooting from 3-point range and grabbed 10 rebounds in last Monday’s 88-66 victory over Notre Dame at Cameron Indoor Stadium. He followed that with 22 more points, shooting 5-of-7 from 3-point range in Saturday’s game versus St. John’s at Madison Square Garden.

The Notre Dame game marked the fourth time this season Trent tied the Duke freshman record by hitting six 3-pointers in a game. For the week, Trent was 15-of-28 (.536) from the field, 11-of-17 (.647) from 3-point range, grabbed 12 rebounds and had two steals. Trent is the currently NCAA’s leading freshman in 3-point shooting (.448) and ranks second overall in the ACC. He is fifth in scoring in ACC games (18.0 ppg).

Miami’s Walker averaged 15.0 points, 4.0 rebounds and 3.0 assists in ACC wins over Pitt and Virginia Tech. The Reading, Pennsylvania, native had key spurts at critical junctures in each of those victories.

Walker recorded a team-high 16 points in the Hurricanes’ home win over Pitt, including a personal 7-0 run to give Miami a second-half lead after the Panthers had a taken one-point advantage midway through the half. He scored 14 points in the Hurricanes’ 84-75 win at Virginia Tech, including eight over the final 3:08 after the Hokies had closed to within three points. Walker played a team-high 71 minutes in the two wins.

De’Andre Hunter in a zone, DeVoe and Lawrence can’t miss, plus more on the ACC in the top 25