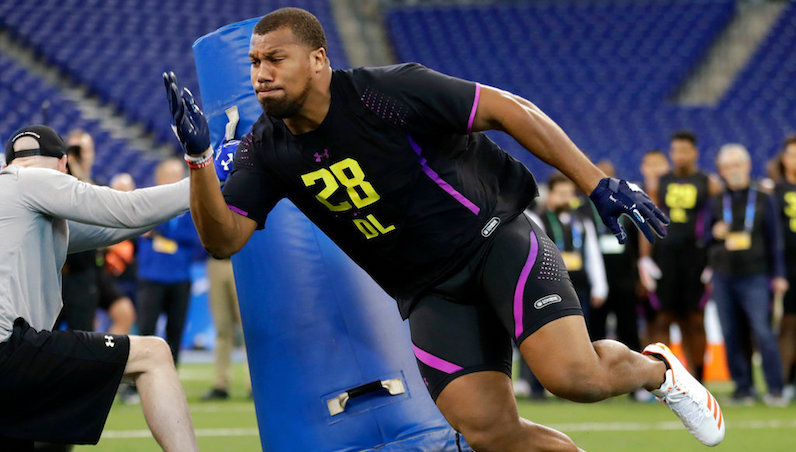 The three-day extravaganza of the NFL Draft starts up later this week. Yes: Arlington, Texas will be the site for 72 hours of pick selections, Twitter leaks, fake trades and Mel Kiper’s hair gel.

I’ll be on the couch watching the NBA playoffs; however, it’s worth noting how the ACC is poised to build upon its draft success over the last five years.

In 2017, 43 ACC players were selected across the draft’s seven rounds; dating back to the 2014 draft, 158 ACC players have been selected — the second most of any conference. Back in 2015, another 47 ACC player were drafted — when the event was held in Chicago.

Led by NC State’s Mario Williams in 2006, the ACC set a record with 12 first round picks. That year, NFL teams selected 51 ACC players, in total: the most ever in the history of the league.

Once again, the ACC’s top draft prospect is an NC State defensive lineman — 6-foot-5, 270 pound sack-bot Bradley Chubb. After a record-setting four-year career in Raleigh, Chubb is a lock to be a top-5 pick.

However, Chubb will not be alone in the first round when it comes to ACC selections. This year, including Notre Dame, 28 underclassmen declared for the draft — highlighted by multiple projected first round picks. Derwin James of Florida State and Virginia Tech linebacker Tremaine Edmunds look like top-15 picks, too.

Of course, there’s also Lamar Jackson; the freaky-talented Jackson looks slotted for a first round selection as well. Jackson and Boston College’s Harold Landry could also go in the top 20 of this year’s draft.

Chubb’s teammate for three seasons at NC State, Nyheim Hines, is climbing draft charts, too. In an age of increased specialization in the NFL, Hines, a do-it-all talent, can contribute in a variety of ways.

3 days out from the draft, and I would fully expect Nyheim Hines to be a top 75 pick from everything I'm hearing. Likely off the board in 2nd half of the 2nd round. Teams I know are very interested in him in that range: #Vikings, #Chargers, #Bengals (at #46!), #Cowboys (at #50!)

Dave Doeren on Bradley Chubb: “This senior class was special”