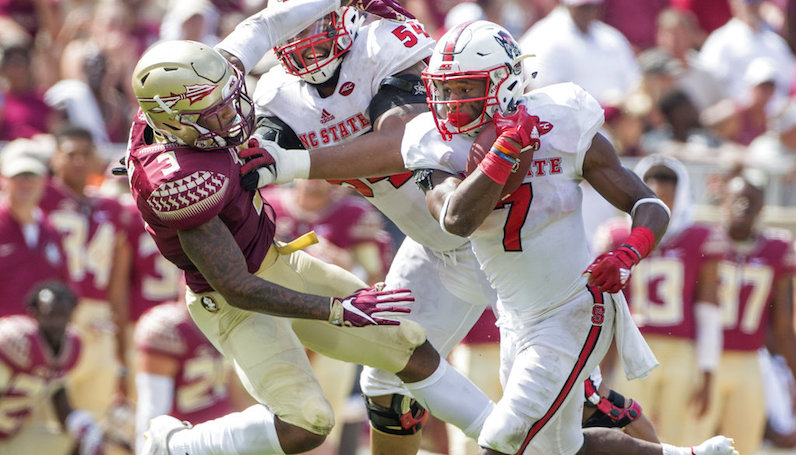 Matt Dayes was healthy, and played the full compliment of games in 2016; NC State featured him heavily, too. Dayes accounted for nearly half of the team’s total carries — 249-of-504 (49.4 percent). Accordingly, Hines spent more time flanked out in the slot.

That’s no longer the case in 2017, though. Make no mistake — Nyheim Hines is a featured back in No. 24 NC State’s balanced offense.

Prior to this season, Nyheim Hines had only one career game with the Wolfpack of double-digit carries — 13 in the Belk Bowl two years ago against Mississippi State. However, in every game this season — including a career-high 24 against Florida State — Hines has carried the ball at least 11 times.

A week after a career-best 25 offensive touches against FSU, Hines tallied another personal record. In the win over Syracuse, the 5-foot-9 Hines shredded the Orange for 115 yards on 19 carries — over six yards per carry. It was the 30th time, dating back to the 2000 season, that an NC State player ran for at least 115 yards in a game.

That, of course, includes Hines’ 1-yard touchdown run five minutes into the fourth quarter that made the game a two-possession contest. This was essentially the second week in a row that Hines iced a game for the Pack; in the landmark win down in Tallahassee, Hines’ 15-yard scamper on 3-and-7 with one minute to play effectively ended the game.

He has been money on third down all season for NC State, too. Hines averaged over 20 yards per carry on third down, and every single third down carry has translated into a new set of downs, per cfbstats.com.

Hines ranks fifth in the ACC both in terms of carries (82) and rushing yards (411); 12 of his carries have gone for 10-plus yards, too. During the first 25 games of his college career, Hines accounted for 287 yards on 61 carries.

Despite his ascension to lead-back status, Hines — who fashions himself as a combination of Warrick Dunn and Marshawn Lynch — has stayed involved elsewhere, too. The Wolfpack game plan to utilize Hines’ track star speed.

He has been targeted less frequently this season in the pass game — from over 14 percent, down to 8.6 percent, per Football Study Hall. Hines is still certainly involved, though. He ranks fifth on the roster in terms of targets and receptions (12 grabs for 69 yards). The junior from Garner, N.C. has four first down receptions, too.

Hines has always been explosive in the kick game, which hasn’t change this year, either. Quadree Henderson, Shaun Wilson and Hines are the only three ACC players to take a kickoff back for a touchdown in both the 2015 and 2016 seasons.

His role as a specialist has increased this year, too. For the first time in his career, Hines has returned punts — three returns for 40 yards. Hines doesn’t have enough returns to qualify, but if he did, that 13.3 yards per punt return average would be good for third in the conference.

NC State has a dynamic trio with Ryan Finley, Jaylen Samuels and Nyheim Hines; second-year offensive coordinator Eliah Drinkwitz has been a whiz at finding ways to get both Samuels and Hines involved as much as possible, with Finley as the trigger man.