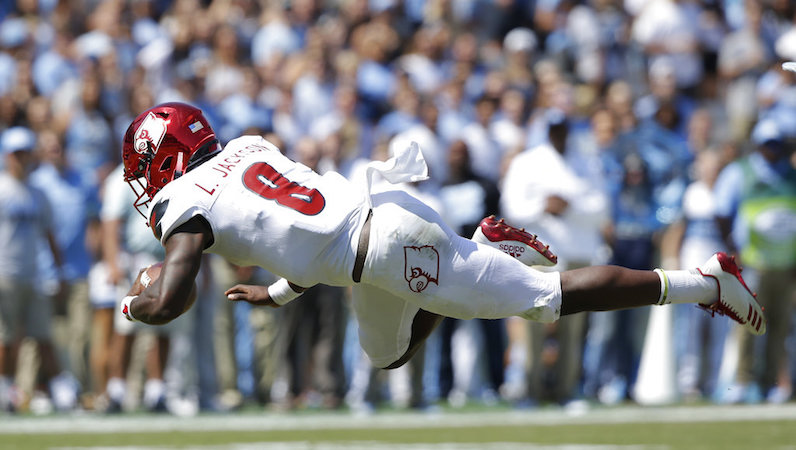 Hello, are you excited for this Saturday’s game between No. 3 Clemson and No. 14 Louisville? Great, me too! It appears we aren’t alone, either.

The central matchup in this game will be Clemson’s front seven against the reigning Heisman Trophy winner, Lamar Jackson.

Jackson, who is the current favorite to win that award again this season, faces an uphill battle Saturday night, though. Louisville’s offense has plenty of skill, like receiver Jaylen Smith, but a retooled offensive line doesn’t bode well against a Tigers defense that’s littered with first round talent.

Let’s go inside the numbers.

Going slightly deeper, though, Jackson — officially — has 15 career 100-yard rushing games. He’s run for over 100 yards in 55.6 percent of his career games at the school. Louisville’s record in those 15 games is none too shabby, either: 12-3.

The three losses came against Auburn (2015), Kentucky (2016) and of course Clemson (2016). The Kentucky performance is a bit of an outlier — the Wildcats were a bad run defense in 2016, but things were kind of unraveling for Louisville by that point last season.

Obviously, there are some confounding variables here, too. Against bad teams, Louisville is more likely to win. Bad teams are also prone to having bad defenses, which would theoretically make it easier to run wild.

It’s worth pointing out, too: College football removes yardage lost from sacks from a quarterback’s rushing total. I’m not the biggest fan of that method, but that’s the world we live in. However, we can add the lost yardage back in, thanks to the wonderful Football Study Hall.

Last season against Virginia, Lamar Jackson officially ran for 88 yards. Look in any box score, and that’s the number you will find. Jackson, however, was sacked five times in that game — two came courtesy of All-ACC linebacker Micah Kiser. That cost Jackson a lot of production on the ground, officially.

If you add the yards back in, though, which Football Study Hall did, Jackson ran for 123 yards in the victory over the Cavaliers. That being the case, we can slightly adjust the record from above; Louisville is 13-3 in games that Lamar Jackson has run for at least 100 yards, unofficially.

Jackson also has seven career games of 300-plus passing yards. In those seven games, Louisville has a record of 6-1; the lone loss coming at Florida State in 2015.

On three occasions, Jackson has thrown for over 350 yards in a game and also ran for at least 100 yards. Louisville is undefeated in those contests — including wins over Purdue and UNC this season.

Since he entered the league in 2015, that’s only been done four times. Jackson accounts for three of those; Deshaun Watson produced the other.

On the other side of things for Lamar Jackson

So it’s fairly obvious, and truly not that surprising: when Lamar Jackson is able to run wild, good stuff usually happens for the Cardinals. However, when you flip that equation, a not-so-surprising result gets spat out, too.

Since the 2015 season, in games where Jackson has attempted at least 10 passes and run for fewer than 50 yards, Louisville has struggled. In those contests, the Cards are 2-5; the two wins came back in 2015 against Wake Forest and Boston College.

That season, the Demon Deacons and Eagles combined to win six total games, and produced this gem, too. They weren’t exactly juggernauts.

Again, these totals take into account yardage that Jackson lost on sacks. That’s the method college football prefers, although it seems to not be the most representative of what’s actually taking place one the field.

It’s reductive to say that as long as Jackson runs for 100 yards, Louisville has a good chance of winning, or should win, or whatever. Way too many other elements factor into a football game; inputs don’t always equal outputs in a game with randomness and 22 things running into one another on every play.

The offensive line for Louisville is critical, too. In the 10 100-yard rushing games Jackson has posted the last two seasons, he’s had an Opportunity Rate below 50 percent just once — the win over Purdue two weeks ago.

In all eight of his 100-yard performances last season, Jackson never had an Opportunity Rate below 50 percent, including the Clemson game. [Note: Opportunity Rate measures the percent of carries that an offensive line does its job — creates five yards of rushing room for the running back.]

However, if Jackson does find ways to consistently get loose on Saturday, then Louisville’s margin for error on defense should be wider than last season. Clemson’s offense is powerful, no doubt, but as good as Kelly Bryant has been this season, he’s not Deshaun Watson.

Can Jackson get it done against the Tigers? Well, all that’s left is to play the game.