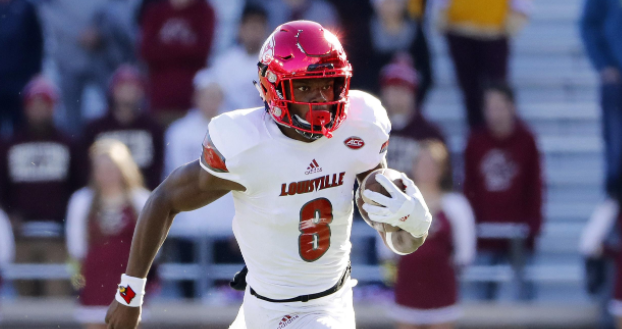 The last two weeks have been rather unkind to Louisville football. The Cardinals followed up their disappointing Thursday night loss at Houston, which swiftly killed their College Football Playoff hopes, with a surprising three-point loss to rival Kentucky. Despite the stumbles, their star quarterback, Lamar Jackson, remains the lead candidate to win the 2016 Heisman Trophy — a distinction he’s had a vice grip on since the second week of the season.

However, due to his team’s recent sputtering, Jackson’s Heisman stock has taken a bit of a dive. Do a quick Google search of “Lamar Jackson Heisman” and a collection of columns will appear, most bemoaning how there isn’t another strong Heisman candidate, or questioning whether the trophy is slipping from his right-handed grasp. There’s a belief that sans another strong contender for the award, Jackson will, disappointingly, claim the highest individual honor in college football.

Yes, it would’ve been great if Louisville stayed in the hunt for a playoff bid, but this team is still really freaking good. They’re No. 7 in Football Study Hall’s S&P-plus rankings; the AP has them ranked as the No. 16 team in the nation. This is far from a bad team. Any angst you have toward a player on a team trending slightly downward winning the Heisman Trophy is misguided, and dripping in 14 layers of recency bias.

Louisville has a chance to win 10 games this season; if they’d lost three games earlier in the year, or spliced throughout, we wouldn’t be having the same conversation. One of their losses also occurred on the home field of one of the four best teams in America — a three-point defeat at the hands of Clemson. In this game, though, Louisville got the better of Clemson on offense, while Jackson (457 total yards, three touchdowns) outdueled Deshaun Watson — another Heisman-level player. If not for a wide margin in penalty yardage, this game could’ve easily gone to the visiting Cardinals.

Let’s not forget: Jackson has been far and away the best player this season. The numbers are jarring (more on that in a minute), but it’s important to remember just how breathtakingly fun the aesthetics of Jackson were:

This should play on an endless loop at the College Football Hall of Fame in Atlanta.

What Jackson put forth this season was one of the greatest individual achievements in the history of college football. He’s currently tied for third national in rushing touchdowns with 21; in 12 games, he threw for 3,390 yards (282.5 per game). Officially, Jackson ran for 1,538 yards — second in the ACC and eighth nationally. However, if you add back in the yardage Jackson lost on sacks, the Cardinals QB ran for 1,799 yards on 196 carries, according to Football Study Hall; this would rank third nationally, and average out to a ridiculous 9.2 yards per carry — far better than any of his 1,500-yard-plus peers.

Louisville’s rushing offense was ranked No. 1 in America in both S&P-plus (154.2) and success rate 55.9 percent. They also averaged 1.31 isolated points on successful running plays — 21 percent higher than the national average. This, too, was thanks in large part to the dynamics of Jackson, who was remarkably consistent throughout the season.

Jackson, truly, had just one bad game — the loss at Houston. He was sacked 11 times this game, and it was the only time all season he officially rushed for fewer than 62 yards. However, if you factor that lost yardage back into his rushing total, Jackson actually ran for 116 yards on 14 carries (8.3 yards per attempt).

His completion percentage leaves something to be desired, but Jackson was prolific through the air, too. He distributed the ball to a host of pass-catchers, while recording four games of at least 350 yards through the air — three of those came against ACC opponents. Jackson’s 30 passing touchdown — spread amongst eight different players — are 10th most in the nation. His 8.9 yards per passing attempt are 12th in the NCAA.

Louisville’s star quarterback accounted for 51 total touchdowns this season, which ranks 13th in NCAA history, and that doesn’t include what he’ll do in his bowl game, too. This total is more than Cam Newton’s Heisman Trophy season back in 2010 (50). It’s also more than what Watson put up a season ago (47), when the Clemson quarterback finished third in Heisman voting.

It’s certainly a bummer that Jackson couldn’t cap his regular season off in style, but one-and-a-half so-so performances at a supposedly inopportune time shouldn’t devalue an overly impressive resume. Lamar Jackson was the best player in college football this season by a wide margin. Don’t focus on the negatives. Don’t try to parse what is or isn’t great.

Do the right thing, and give this man the Heisman. We may not deserve Lamar Jackson, but it’s obvious that he’s earned this trophy.

Scott Satterfield on staff continuity at Louisville: “Anytime you go into something you want to be with people that you trust”

The numbers behind Jordan Nwora, why his return has Louisville poised for strong season