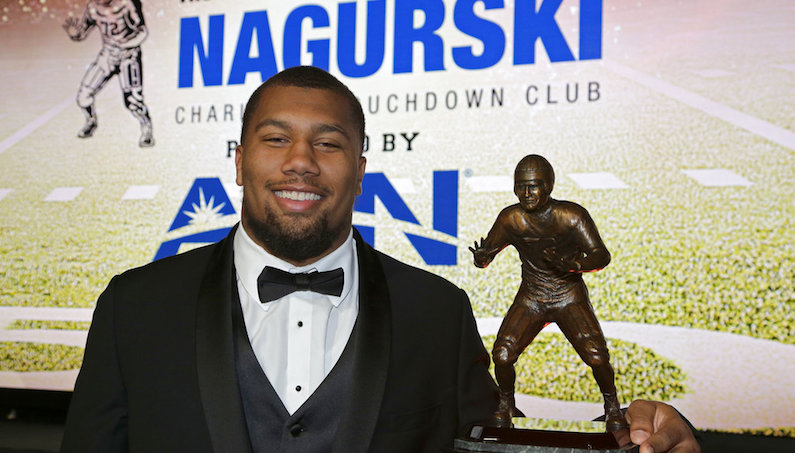 On Monday night, NC State’s Bradley Chubb was announced as the winner of the 2017 Bronco Nagurski Award. It’s the cherry on top of an exceptional four-year career in red and white for Chubb.

Let’s take a quick run through some of the future first round picks numbers.

What he did this season

Well, where should we start? There are plenty of options; Bradley Chubb did absolutely everything for the Wolfpack. For the second straight season, Chubb recorded 10 sacks; he’s one of only two players — along with Ja’Von Rolland-Jones of Arkansas State — to record double-digit sacks in back-to-back seasons.

NC State’s defensive line is outstanding, but Chubb is a one-man demolition crew. And a good one at that. The 6-foot-4 senior led the ACC with 25 tackles for loss — way more than anyone else. Clemson’s Clelin Ferrell was second with 17 tackles for loss. Chubb’s tackles for loss resulted in a total of 103 lost yards for NC State’s opponents.

Should be no surprise that NC State's Bradley Chubb racked up another 4 QB pressures and added 5 defensive stops in a strong performance against UNC in the win on Saturday. pic.twitter.com/qEbEdTF9pv

According to Football Study Hall, Chubb accounted for 27 run stuffs this season. That, too, was easily the most in the ACC this season.

*Run Stuff: rush plays stopped at or behind the line

Chubb, however, isn’t done there. Havoc Rate is a Football Study Hall statistics that measures the percentage of plays that a defense or position group records a tackle for loss, forces a fumble, or defends a pass. NC State’s defensive line, led by Chubb, posted a Havoc Rate of 7.4 percent — No. 4 in the FBS.

Even if Bradley Chubb decides to sit out NC State’s bowl game — a totally reasonable decision, by the way — then he will still finish at or near the top in several statistical categories.

It should come as no surprise, but Chubb’s chief rival in NC State’s record book is Mario Williams — the No. 1 pick in the 2006 NFL Draft and an All-Pro defensive end. Williams holds the season and career records for sacks and tackles for loss. Here’s how the two pass-rushing menaces stack up.