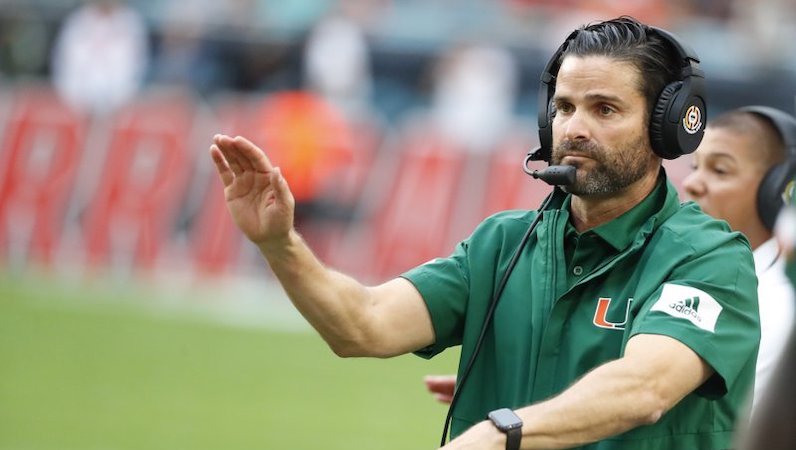 In this Saturday, Nov. 9, 2019 file photo, Miami head coach Manny Diaz calls out a play during the first half of an NCAA college football game against Louisville in Miami Gardens, Fla. Miami coach Manny Diaz told The Associated Press on Monday, Feb. 3, 2020 that he believes the Hurricanes are already better than they were when last season's 6-7 debacle ended. Diaz says the Hurricanes have improved their roster and their coaching staff, both by additions and subtractions. He also drew a parallel to the culture that the Miami Heat have stuck with in their bounceback season this year. (AP Photo/Wilfredo Lee, File)

Miami football continues to surge in 2021 recruiting with the commitment of 5-star defensive tackle Leonard Taylor.

Taylor, a Miami native, committed to Miami on Thursday. The 6-foot-4, 255-pound Taylor rates as the No. 1 defensive tackle in the 2021 recruiting class and a top five player overall, according to 247 Sports.

Taylor’s decision is significant for a number of reasons, too. First off, the Florida Gators were well positioned to land Taylor; at times, they were considered the favorite, too. However, Miami held Florida off, along with several other power programs: Alabama, Auburn, Florida State and Georgia, among others.

The addition of Taylor also comes two weeks after Miami landed a commitment from 5-star in-state safety James Williams. With Taylor and Williams, Miami’s 2021 recruiting class has commitments from two top 15 prospects. (Miami beat out UGA to land Williams, too.)

During the 2019 season, as a junior, Taylor recorded 68 tackles, 26 tackles for loss, 11 sacks and two interceptions for the Panthers. At the end of the year, Taylor was named 1st team All-Dade, and 3rd team All-State.

Taylor is the second player from Miami Palmetto High Schools to commit to the Hurricanes in 2021; in late July, Miami also added a commitment from 3-star wide receiver Brashard Smith.