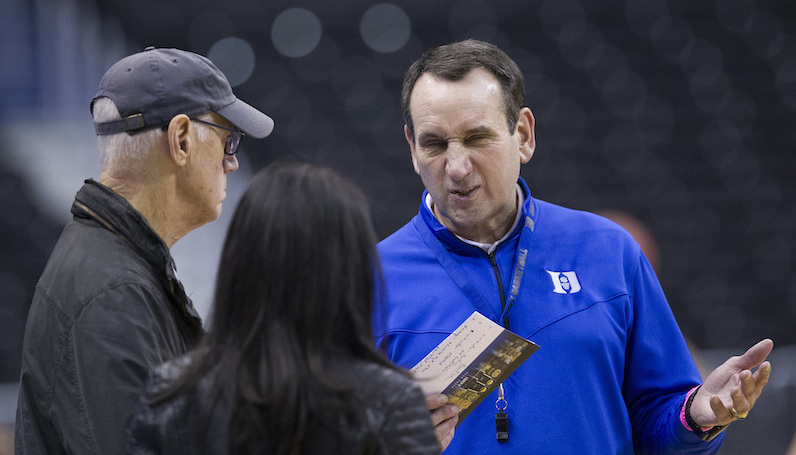 One of the top prep basketball players in America is moving up in the world — almost literally. According to a report from Evan Daniels at 247 Sports, 5-star guard RJ Hampton plans to reclassify from the 2020 class to 2019.

247 Sports ranks the 6-foot-5 Hampton as the No. 5 overall prospect and the top combo guard in the 2020 class. Duke is one of the contenders to land Hampton — along with Memphis, Kansas and Kentucky. After its Final Four run, Texas Tech was recently added to the mix, too.

Five-star guard RJ Hampton is reclassifying to the 2019 class and down to four schools, his father tells @247Sports. | Story: https://t.co/bCBXWv2vrZ pic.twitter.com/c4vDe8BU5f

As of right now, Penny Hardaway and Memphis lead for Hampton; however, it’s a tight race. Duke has obviously found some success with reclassification players, like Marvin Bagley. Memphis has already signed the No. 1 player in the 2019 class, too: 5-star center James Wiseman.

The Blue Devils also have a crowded backcourt; Tre Jones returns as one of the top players in America, and he should have to ball in his hands as much as possible. Duke’s No. 1 recruiting class also includes two guards: top-35 prospects Boogie Ellis and Cassius Stanley.

Hampton’s camp claims that won’t factor into his decision, though. Last week it was reported to Hampton planned to make a decision on his class status after the Peach Jam in July; however, that process was quickly sped up, obviously. (It should be noted: Kentucky also has Ashton Hagans returning as its point guard, too.)

,⁦@RjHampton14⁩ says he’ll decide on reclassifying the week after Peach Jam in July. Will then decide on college in August.

Duke assistant coach Nolan Smith was in attendance recently to see Hampton put on a show on the Nike EYBL circuit.