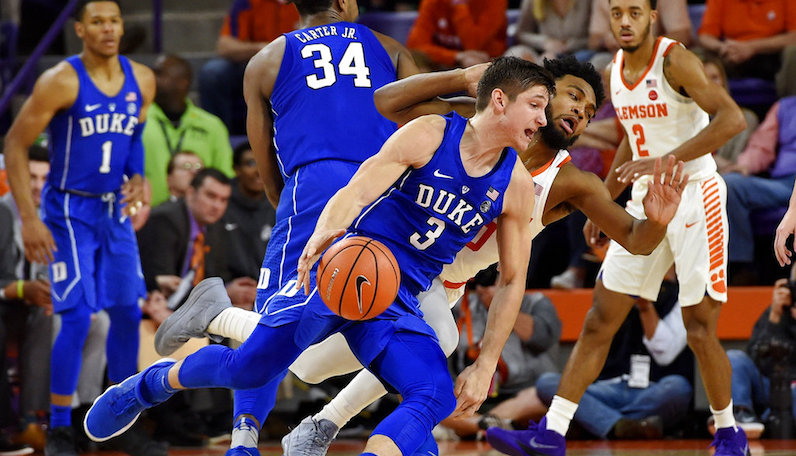 ACC basketball weekly honors are determined by a vote of a 15-member media panel. The Blue Devils’ Allen was recognized for the second time this season. The ACC Rookie of the Week selection is the second of the season for Brissett and the first for Hunter.

Allen led Duke by averaging 22.0 points and 5.0 assists in a pair of key ACC wins last week over Virginia Tech and at No. 11 Clemson. Allen poured in a game-high 25 points on 7-of-15 from 3-point range with six assists in Wednesday’s 74-52 win over the Hokies. The seven threes matched a career-high.

The Jacksonville, Florida, senior followed that with a game-high 19 points in the 66-57 win at No. 11 Clemson on Sunday, knocking down 2-of-3 from 3-point range and making all nine of his free throws with four assists and four steals.

Syracuse’s Brissett averaged 20.5 points and 9.5 rebounds while shooting .556 from the field while playing an average of 35.5 minutes in a loss to NC State and a road win at Miami. Brissett delivered a career-high 25 points in last Wednesday night’s game against NC State at the Carrier Dome, and then came back with his 10th collegiate double-double (16 points, 12 rebounds) in Saturday’s 62-55 win over the Hurricanes.

Brissett, a 6-foot-8 native of Mississauga, Ontario, went a combined 6-of-13 from 3-point range in the two ACC games and was 5-of-6 from the foul line.

Hunter had seven points to start a 13-0 run the first half and had 10 straight points to give the Cavaliers their largest lead of the game in the second half. He has led UVA in scoring in four ACC games and has tallied double figures in eight league games. He is averaging 11 points on 52.7 percent shooting along with 3.9 rebounds in all ACC games.