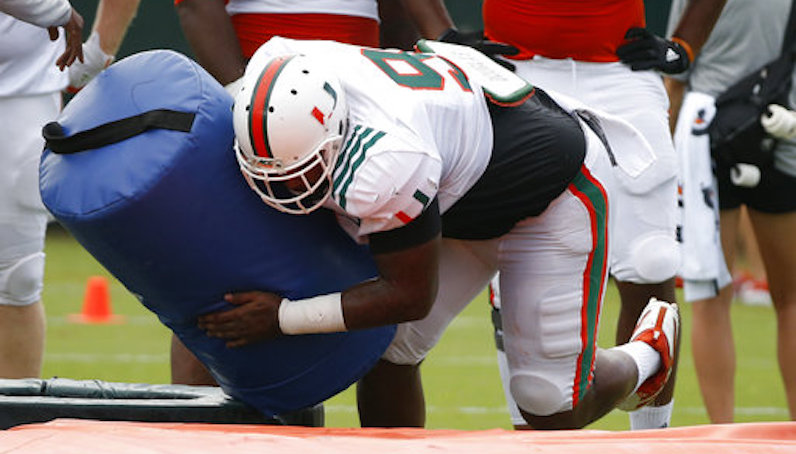 It’s one of college football oddities — the simple fun that comes with watching a defensive lineman in a single-digit jersey number wreck havoc. There’s some blissful cognitive dissonance associated with watching a number normally associate with speedy skill position players glued to some 300-pound lineman, hellbent on stuffing ball carriers in the backfield.

Sunday night in Arlington is one that Miami football would quickly like to forget — especially the Hurricanes offense, which spurted for most of the night. However, there’s at least one thing for Miami to hang its hat on: Gerald Willis and the defensive line.

What you tacklin’ ’bout, Willis?

LSU had all kinds of issues blocking Gerald Willis, who get consistent penetration all game for the Hurricanes. Willis finished with four tackles for loss, which ranks second nationally, and a sack. He also defended a pass, too; his efforts weren’t unnoticed, either.

PFF's ACC Team of the Week for Week 1 on defense pic.twitter.com/mrYGzrlEbJ

According to Sports Reference, Willis became just the 12th ACC player since the 2000 season to record at least four tackles for loss, one sack and one pass defensed in the same game. He’s joined on that list by guys like Mario Williams, Robert Quinn and Manny Lawson — among others.

Back to Sunday night, and going forward

LSU hung 33 points on Miami, but that included an interception returned for a touchdown, and four Cole Tracy field goals. Considering how Miami got pummeled in terms of field position — thanks in part to a Miami offense that couldn’t move the ball — that’s not so bad.

Outside of the 50-yard touchdown run by Nick Brossette — which is significant, too — Miami’s run defense was pretty good. In total, the Tigers ran the ball 41 times for 156 yards — 3.8 yards per carry.

Miami had an excellent defensive line in 2017; that group ranked fourth in the FBS in Havoc Rate, per Football Study Hall — recording a tackle for a loss, defending a pass or forcing a fumble on 8.8 percent of the plays they faced.

Three of those defensive linemen — Chad Thomas, RJ McIntosh and Kendrick Norton — were selected in the 2018 NFL Draft. With Willis playing like this, though, plus outstanding linebackers Shaq Quarterman and Michael Pinckney, the Canes should be a force again against the run.