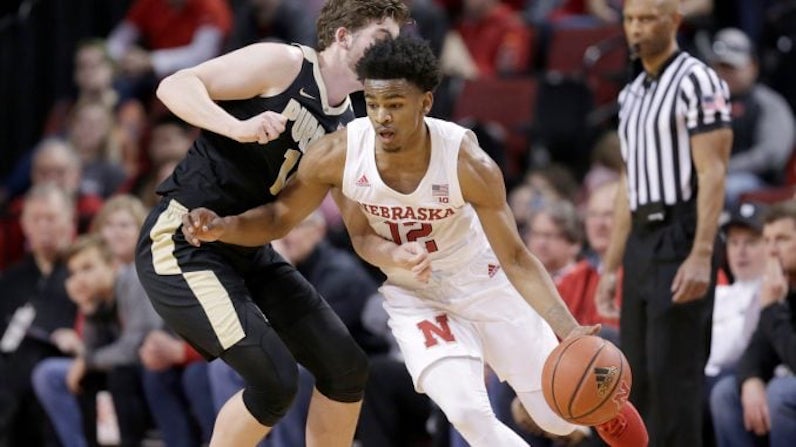 While at Nebraska, guard Thomas Allen drives the ball against Purdue. (AP Photo)

It took a roundabout approach, but after years of waiting, Thomas Allen is on track to be a real contributor at NC State.

Nearly four years ago, Allen — at the time a 3-star prospect in the 2017 recruiting class — committed to NC State. Allen, a local prospect from Raleigh, then signed with the Wolfpack in Nov. 2016. Less than five months later, though, Mark Gottfried would be out at NC State; Kevin Keatts arrived in Raleigh as the replacement. One of the first bits of roster management for Keatts was to satisfy Allen’s request for a release from his LOI.

Kansas, Nebraska, Xavier and Ole Miss all went after Allen. Less than a month after his release from NC State, Allen committed to the Cornhuskers.

During the 2019-20 season, Allen was able to adapt himself to NC State’s system, which runs heavy on pick-and-roll offense and switches 1-4 on defense. The 6-foot-1, 180-pound combo guard is a solid two-way player with nearly 1,200 minutes at the college level under his belt.

As NC State works to reorient its offense without Markell Johnson and CJ Bryce, Allen should feature prominently — not as a primary ball handler, but as a spot-up threat and secondary creator.

With Keatts in Raleigh, there’s no concern for NC State’s offense to ever have an identity crisis; the Wolfpack space the floor, and play four-out spread pick-and-roll basketball. While NC State utilizes multiple guards to ignite screen-roll offense, most of the primary responsibilities landed on Johnson’s plate.

Johnson’s time in Raleigh is up, though, which means Keatts must find a new lead guard. There are several candidates, although incoming point guards Cam Hayes and Shakeel Moore should have the inside track.

Devon Daniels will absolutely factor into this equation, too. As I wrote back in April, Daniels put up solid pick-and-roll numbers this season; he’s a strong option to generate offense, especially from NC State’s side ball-screen action.

According to Synergy Sports, the Cornhuskers scored 1.03 points per possession when Allen passed out of the pick-and-roll to a teammate that finished the possession. That’s a solid number, though the volume is low (31 possessions).

Regardless, Allen should kickstart his fair share of possessions from NC State’s 1-4 high side pick-and-roll sets.

Allen is more a ball-mover in the half court, though he’s also demonstrated impressive vision, from time to time.

During his sophomore season, Allen played in a fairly egalitarian offense at Nebraska and posted a 12.8 percent assist rate — good for 2.7 assists per 40 minutes.

Where Allen can really add value in the half-court offense is as a second-side weapon. For his career, Allen is a 35.4 percent 3-point shooter: 90.2 percent of his career makes have been assisted, too. On catch-and-shoot attempts in the 2018-19 season, Allen posted an effective shooting rate of 59.4 percent, according to Synergy; that ranked inside the top 20 of the Big Ten.

NC State’s pick-and-roll offense can generate north-south movement with rim-runners like DJ Funderburk (1.67 PPP) and Manny Bates (1.39 PPP). Their activity will force help rotations, which should open up looks for Allen and NC State’s other spot-up threats. With Johnson and Bryce gone — two solid off-dribble shot-makers — the Wolfpack may need to be sharper when attacking gaps and moving the ball.

Allen’s 3-points shooting can also draw a closeout, especially with some advantage created earlier in the possession. With his quicks, Allen’s shown the ability to slash to the rim against a defense in recovery mode.

There are impressive flashes from Allen when attacking closeouts on spot-up looks. Once again, Allen blows by Creighton’s Ty-Shon Alexander — a solid 3-and-D prospect for the 2020 NBA Draft. Even when driving with his left hand, Allen can separate (mid-lane) and finish.

Allen and Johnson would’ve paired well as a backcourt duo on offense; it’s a bit of a shame those two never saw game action together. Johnson is such a clever pick-and-roll operator; Allen could’ve exploited the defensive gaps that Johnson’s handles created. That ship sailed long ago, though.

Daniels, however, has showcased an ability to attack off the bounce and pressure the interior of opposing defenses.

Allen makes a lot of sense in lineups with Daniels, and Hayes or Moore at point guard. With Jericole Hellems as a small-ball 4, NC State can play 4-out basketball — which opens the floor for pick-and-roll. If Funderburk returns for his senior season, though, twin-big lineups with Bates will obviously feature prominently, too.

(Up to this point, I haven’t seen much of Hayes, but Moore is strong and quick; he attacks downhill with a powerful burst. Moore looks like a player for NC State — one that could emerge as the program’s next half-court engine.)

Similar to Braxton Beverly, who will also factor into this mix, Allen has the ability to operate as a movement shooter. When he’s off the ball, Allen will relocate into vacant space along the perimeter, shifting left or right. This is simple stuff, but it’s valuable: it creates open spot-up looks or closeouts to attack.

As I’ve written before, NC State’s offense features little in the way of off-screen shooting — specifically pindowns and flares. However, Allen has good off-screen skills, which could help on the margins, too. Allen went 8-of-18 (58.3 eFG%) from off-screen looks in the 2018-19 season, per Synergy.

Allen shoots such an easy ball; his mechanics are sound, and he snaps that follow through release. So much of this, though, comes from his lower body. In the clip above, watch Allen jet off the initial pindown from Isaac Copeland and into the handoff exchange with Isaiah Roby. Allen jump stops with two feet, immediately squares to the basket, and lifts before Xavier Tillman can truly bother him.

The game of basketball isn’t a one-way street, however. Even as certain aspects of the game become more specialized, everyone (with maybe the exception of Trae Young) still has to play on both ends of the court. Allen projects as an impactful two-way guard.

While he won’t overwhelm opposing ball handlers with size, Allen is a fluid athlete and an impressive point of attack defender.

Allen’s on-ball defense jump out on film. He can really press up on opposing guards, forcing multiple direction changes. When guarding pick-and-roll, Allen displays a willingness to make himself skinny and fight over the top of the screen.

There’s an event-creation aspect to Allen’s game as well. During his sophomore season, Allen posted a 2.6 percent steal rate, while committing just 1.4 fouls per 40 minutes (No. 16 nationally). Going back to the 2007-08 season, Allen is one of only 35 players with a steal rate of 2.5 percent and a fouls per 40 rate of less than 1.5.

(To be clear, Trae Young is a stud and he made modest improvements with his defense this season. Even with an incredible amount of offensive responsibilities, though, Young must continue to get better with his defensive efforts. Young ranked last in the NBA this season in defensive PIPM.)

Of course, NC State’s defense switches aggressively 1-4; at times, the Pack will even switch 1-5 with Funderburk at center. This tactic is one of the reasons opponents assisted on just 43.3 percent of their field goals against NC State this season — No. 24 nationally in defensive assist rate. Opponents have assisted on less than 51 percent of their field goals in five of Keatts’ six seasons as a college head coach, per KenPom.

This type of pick-and-roll defense from Allen is perfect, though, for how the Pack defend with Bates in ball-screen coverages. NC State has Bates drop; the 6-foot-11 Bates comes to the level of the screen (or just under it) and stays in front of opposing ball handlers until his teammate can get over the top in rearview pursuit.

Let’s just say: Allen will be slightly more adept at this defensive tactic than Pat Andree.

By guarding ball screens this way, NC State can funnel drivers in the direction of Bates — a menacing back-line presence who led the nation in block rate this season: 16 percent. Funderburk is a quality rim protector as well, though not to the level of Bates.

According to Synergy, NC State’s opponents shot 49.1 percent on non-post-up attempts around the basket (1.02 points per possession), which ranked 32nd in the nation. This was a major improvement for the Wolfpack. (A little over 35 percent of opponent half-court field goal attempts resulted in a non-post-up at the rim, the 11th highest percentage in the ACC.)

During the 2019-20 season, Daniels played skillful, aggressive point of attack defense, too. Daniels has good size and lateral fluidity — sliding in front of opposing guards and getting over the top of screens. With Allen and Daniels, Keatts has two guards that can heat up the basketball, while Bates shuts down the paint.

Allen’s most obvious contributions to NC State will come on offense, as he looks to boost a spot-up attack that’s slumped some the last two seasons. However, what Allen brings to the table defensively, could also push the Pack to outperform offseason expectations.