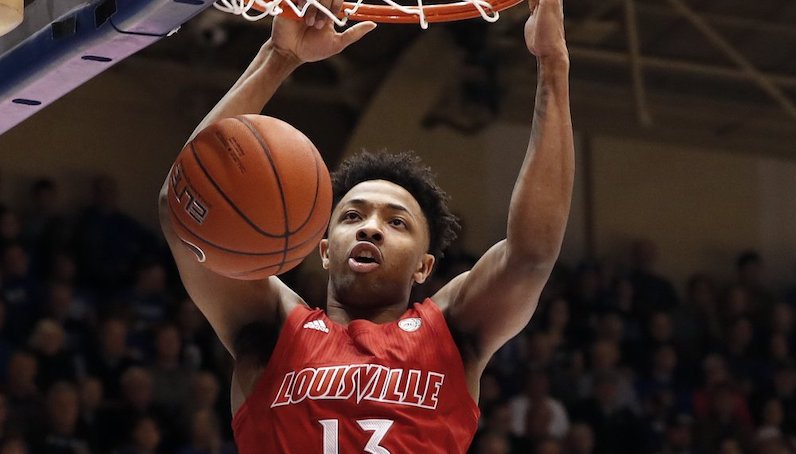 Louisville basketball is currently operating without several key pieces due to injuries, but that hasn’t stopped the Cardinals from jumping out to an impressive 4-0 start. Unsurprisingly, David Johnson and Carlik Jones have been the two catalysts; Dre Davis has stepped into a large role on the wing as well. But up front, the Cards have received significant contributions from Jae’Lyn Withers and JJ Traynor.

There was plenty of excitement when David Johnson decided to return for his sophomore season at Louisville. Johnson, a 6-foot-5 point guard, showed real flashes as a freshman: he can really pass and pressure the rim with a (mostly) functional handle. Early on this year, though, Johnson has flashed new components to his profile.

It’s only four games, but Johnson’s 3-point attempt rate has jumped (35.1 percent of FGA), as has his free throw attempt rate (37.8 percent). There are still reasons to be a little skeptical of the shot; however, it’s good to see him step into these looks with rhythm and confidence.

Opponents will continue to sag off Johnson away from the basketball and go under against him in the pick-and-roll. Even if the shot isn’t falling, Johnson has counters to this, though. Playing off Johnson when he has the ball gives him even more windows to thread passes. He can simply pass over the top of defenders.

Johnson was already a pretty good driver and passer of the basketball a year ago, but he’s learned new pick-and-roll tricks — perhaps courtesy of new teammate and ball-screen whiz Carlik Jones. Johnson is more in control and more manipulative now — at least at the outset.

First 3 games this season (not including WKU): Louisville with a net rating of +29 points per 100 possessions in 82 mins (+37) with David Johnson + Carlik Jones on the floor together, per Pivot Analysis

Watch Johnson work here against Seton Hall; the Pirates try to ice the pick-and-roll between Johnson and Jae’Lyn Withers. Johnson, however, reads the coverage and dribbles around Withers. Instead of barreling straight at Ike Obiagu, Johnson snakes this ball screen — dribbling back against the path of the perimeter defender.

Johnson shows great patience. He lets Myles Cale recover back to him, but Johnson makes sure to pin Cale on his back. This is where Johnson shows his strength, too: the sophomore guard absorbs contact mid-stride from Cale, and is still able to power up for the finish above the 7-foot-2 Obiagu (6.1 blocks per 40 minutes in his career).

Over the last two seasons, Louisville’s post offense primarily revolved around back-to-the-basket bully Steven Enoch — with a little face-up stuff for Malik Williams mixed in as well. The Cards also designed some stuff for Jordan Nwora, although those plays rarely generated efficient offense.

Minus Enoch — and Williams to start the season — Louisville has looked to post both Johnson and Samuell Williamson.

Most of these post possessions come off the same action in the clip above: Johnson dropping down to the box off a UCLA cut. This is a nice way for Louisville to invert its offense; Johnson can pass out of the post if a double team comes, but this is really a way to get him going to the rim — outside of transition or pick-and-roll.

During the blowout win over Western Kentucky, Louisville posted Johnson off a different action, though. In this clip, the Cards use their 1-4 high Iverson cut look; Dre Davis crosses the half-court formation over screens from JJ Traynor and Withers. While this happens, Johnson mirrors Davis on the back side of the cut. However, instead of clearing to the corner, Johnson establishes paint position.

Jones enters the ball to Traynor at the elbow while Johnson makes himself presentable on the block. WKU sends a double, but Johnson is too quick and strong; he splits the double without much concern and finishes the play with a righty hook shot.

Johnson’s emergence hasn’t come on just the offensive side of the floor, though. With his size, and ability to get in a stance and slide, Johnson can be a force defensively on the basketball.

As good as his on-ball presence has been, Johnson’s team defense has really stood out. Along with being an aggressive and coordinated athlete, Johnson has good feel and anticipatory skills.

Johnson posted a 2.5 percent steal rate as a freshman, which is solid. In the Western Kentucky game, though, Johnson recorded a career-high four steals, while showing new dimensions as a help defender. Watch him read this high-low feed from Charles Bassey; the pass is off the mark, but Johnson beats Carson Williams to the ball with ease.

For now, the jumper remains a bit of mystery, though there are positive indicators (11-of-14 FTA this season). Ultimately, how that shot develops will determine his arc as a prospect. Regardless, few returning college players did more for their draft stock over the first week of the season than Johnson.

The preseason injury Malik Williams suffered was a bummer for so many different reasons. Williams is one of the best frontcourt defenders in the country; after three years platooning at the center spot, the 2020-21 season meant he could take ownership of the position. Unfortunately, yet another foot injury derailed — temporarily — his ascension.

In his place, though, Louisville has received significant contributions from a couple of young frontcourt players, including Jae’Lyn Withers.

The redshirt freshman is a smooth athlete for the center position. What he lacks in power — Bassey pushed him around some — Withers makes up for with positioning, coordination and footwork.

Withers may not offer much in terms of true rim protection; he’s blocked just one shot in 108 minutes of action, so far. But he’s shown the ability to guard ball screens in a variety of ways.

Over the first four games of his career, Chris Mack has asked Withers to switch, drop and show on screens. Withers hasn’t been perfect, but he’s looked comfortable in all scenarios.

Just two years removed from prep basketball, Withers looks ready and willing to slide across multiple positions over the course of a single possession. Withers can do all of that while also being on time with help responsibilities. This is the kind of stuff that will make Williams, his elder teammate, proud.

As a team defender, Withers has flashed some event creation in space as well, including this dig against Western Kentucky, which trigged a gorgeous hit-ahead pass from Johnson to Davis, another promising freshman.

That versatility goes a long way and can help Louisville adapt to different matchups. During the wins over Prairie View A&M and Western Kentucky, Louisville was a combined +44 in 60 minutes with Withers on the court.

On offense, Withers has scored the ball efficiently (62.5 2P%) and showcased some really interesting skills. Withers may offer some stretch potential to Louisville’s offensive frontcourt; seven of his 31 field goal attempts have come from beyond the arc (2-of-7 3PA).

Even more impressively, though, Withers has a little bit of craft and can make plays in space. Bassey gives Withers room here, but this is tasty shot creation off the pick-and-pop with Johnson: jab step catch-and-go into a between-the-legs crossover and a smooth gather on the jumper. Wow.

Withers has also shown a willingness to utilize his handle while driving to the rim. Obiagu gives him a lot of room here, too, but Withers goes at him and finishes a pretty tough attempt — floating through contact outside the restricted area.

According to Synergy Sports, Withers leads Louisville with three and-one finishes this season. Withers is also shooting just under 77 percent at the rim.

Tray-ning Wheels may not be necessary

Withers, however, isn’t the only rookie big buy that’s proven to be an early-season difference-marker for the Cardinals. JJ Traynor has also been quite productive.

A true freshman, Traynor is long and skinny: 6-foot-8, 200 pounds. He should bulk up over his career, but his frame and bounce make for a nice profile as a hybrid forward/spot center. Similar to Withers, Traynor has been deployed in several different fashions as a pick-and-roll defender.

He’s had a mental lapse on occasion, but all in all, Traynor is ready to contribute. The Cards are +76 with Traynor on the floor this season — in 76 minutes. Traynor was also critical for Louisville down the stretch in the win over Seton Hall.

Traynor may be young, but he doesn’t lack for confidence. The two free throws he hit late against the Pirates were huge, but he also looked comfortable stepping into wide open spot-up 3 against WKU — off of a little movement, too.

Louisville has used this half-court action a fair amount this season: empty-side pick-and-roll with Jones or Johnson and the center setting a flat ball screen. While the screen-and-roll develops, the 4-man — Williamson, Quinn Slazinski or Traynor — shades over as a release valve.

With his athletic profile, though, Traynor will likely get most of his offense around the basket this season. So far, Traynor is 9-of-13 on field goal attempts (69.2 FG%) at the rim, including five dunks.

Louisville will obviously be at its best this season when Williams returns; however, Withers, Traynor and Aidan Igiehon (3 dunks) have filled in admirably.

Minlend out for several weeks with sprained MCL