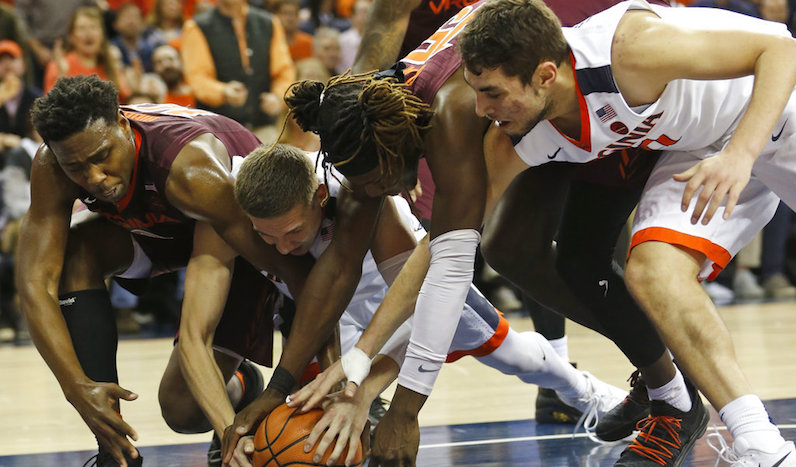 The last week was quite the boost for Virginia Tech basketball and its NCAA Tournament hopes. After Justin Robinson led a midweek victory over NC State, the Hokies went on the road to face No. 2 Virginia in Charlottesville.

This was a seesaw game that went back and forth; Virginia Tech even held a nine-point lead at the eight-minute mark of the first half. Late in the second half, Devin Wilson cut backdoor and scored at the rim off a feed from Kerry Blackshear. That bucket put the Hokies up 49-45 with 1:21 to play; according to KenPom, VT had a win probability of 74.6 percent at that moment.

However, after back-to-back field goals from Ty Jerome, Virginia had a chance to win at the buzzer — Jerome’s three-ball clanged off, though. Overtime at JPJ.

With 1:05 left in overtime, Devon Hall drilled a lefty three-pointer; on the next possession, Isaiah Wilkins snagged a defensive rebound following a Justin Bibbs miss. Chris Clarke fouled Wilkins, who sank both free throws, which put UVA up 59-54. At that moment, Virginia Tech had a win probability of just 1.3 percent, per KenPom.

Over the final 39 second, though, the Hokies pulled a rabbit out of a hat. According to KenPom, this is the 20th lowest win probability this season that a team has had before going on to be victorious.

Blackshear hit a jumper, and Hall went 1-of-2 from the free throw line (a big miss) — it’s now a four-point game. Freshman Nickeil Alexander-Walker came off a flare screen, and then hit a three-pointer — his 46th of the season, and none bigger.

A Robinson miss was follow by an incredible offensive rebound and put-back from Blackshear (9.4 percent rebound rate). After another free throw miss from Blackshear, Jerome had more more shot to win it — however, his three-point launch went wide right.

Buzzworthy: Why VT’s Justin Robinson is one of the best guards in the ACC