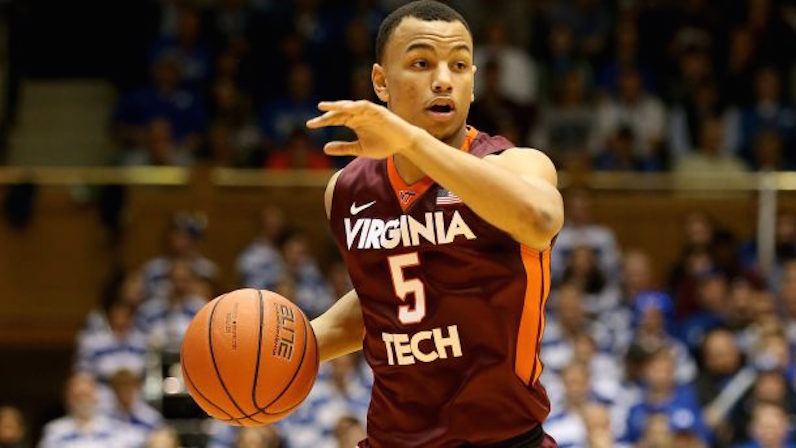 This summer, ACCSports.com is taking a look at some of the best point guards in the ACC in an effort to see if we can determine who will be the league’s top lead guard next season. Last month, we looked into the cases for Bryant Crawford and Bruce Brown. We then checked out pick-and-roll maven Matt Farrell and UNC’s Joel Berry. Today, we focus the under-the-radar Justin Robinson of Virginia Tech.

If variety is the spice of life, then basketball is that oversized pot of chili you let simmer on Sunday afternoon: All are welcome — the more, the merrier. One of the best aspects of this game is how it diverts from homogeneity; individuality is celebrated. There are so many different styles, strategies and approaches that can be taken to arrive at a singular goal: win basketball games.

The “Best Point Guard in the ACC” series has been a reminder that top-flight point guards aren’t monochromatic. Some are pick-and-roll wizards; others are catch-and-shoot bombers.

Virginia Tech’s Justin Robinson certainly has the ability to shoot and score, but his pass-first mentality helped the Hokies hit newfound heights in 2016-17. This is evidenced by the fact that Robinson was one of just four players in the ACC last season to record an assist rate of at least 25 percent, score 10 or more points per game and grab at least three rebounds per contest.

Buzz Williams, who is headed into his fourth year in Blacksburg, has been a head coach in college basketball for a decade. Williams had several teams at his previous stop — Marquette — that featured multiple future NBA stars. Jae Crowder, Wes Matthews and Olympian Jimmy Butler all played for Williams. However, this Virginia Tech basketball team was the most efficient offense Williams has ever coached in college ball, according to KenPom.com: 117.4 points per 100 possessions. (Those three players, by the way, made over $40 million combined this season in the NBA.)

Virginia Tech ranked No. 21 nationally in offensive efficiency. That is the highest-rated offense ever for the Hokies in the KenPom Era, which dates back to the 2001-02 season.

Robinson was a massive part of that development as he evolved into a top-flight distributor for a well-balanced VT attack. In league play, Robinson assisted on nearly 30 percent of his teammates’ made field goals when he was on the floor. That ranked third in the ACC (29.5 percent assist rate). He played a lot of minutes in conference games, too — roughly 76 percent of the available minutes.

According to Synergy, Virginia Tech scored 1.34 points per possession (54 FG%) when Robinson was a passer out of PNR action. That ranks second in all of Division I basketball in offensive efficiency as a pick-and-roll passer.

More than a passer

Robinson shot 35.2 percent from beyond the arc on a healthy average of 3.3 attempts per game. The native of Manassas, Va., struggled to shoot off the dribble, according to Synergy: 28.6 percent. That’s not uncommon, though; it’s easier to shoot after a catch.

Robinson posted an impressive adjusted field-goal rate of 57.8 percent on catch-and-shoot possessions. This metric factors in the increased value of a three-pointer.

He can’t really finish at the rim (45.2 FG%), and his in-between game — pull-ups and floaters — is a work in progress. That is the next evolution for Robinson.

Five Hokies averaged double figures scoring last season. Zach LeDay (16.5 PPG) and Seth Allen (13.3 PPG) will both be gone. Chris Clarke, a skilled slasher, will enter the 2017-18 campaign hopefully healthy after a mid-February ACL tear cost him the remainder of his sophomore season.

Virginia Tech basketball will need Robinson to up his creativity as a passer and take on a larger role as a scorer. He’ll be prepared.