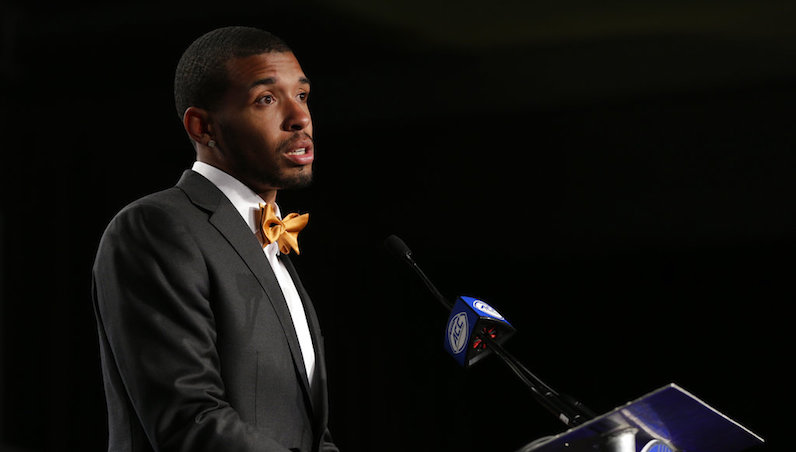 To be a wide receiver in Georgia Tech’s offense must be an exercise of patience. Those players spend the majority of the game on the field, and are rarely targeted.

Since Paul Johnson took over at Tech in 2008, and installed his power running game on offense, the Yellow Jackets have never had a player catch more than nine passes in a game.

In fact, per Sports Reference, on only 16 occasions over the last nine seasons has a Georgia Tech player caught five or more passes. All-Pro wide receiver Demaryius Thomas accounted for five of those games back in 2008 and 2009.

For the sake of comparison, NC State has produced 129 performances of five-plus receptions for an individual player in the same span of time. Clemson has 183; Wake Forest has 133.

Only one player on the current roster can make the claim to have recorded at least five receptions in a game: senior wide receiver Ricky Jeune.

Ricky Jeune is not a high-volume receiver; that’s just not a realistic option in Johnson’s option offense. However, he is far and away this team’s top target.

According to Football Study Hall, Jeune was targeted 53 times in the 2016 season — 25 more times than the next closest receiver, Brad Stewart. He was the target on 36.6 percent of GT’s pass attempts.

Jeune hauled in 25 of those for receptions — 1.9 per game. Do the quick math, and that means Jeune produced a catch rate of 47.2 percent. In a prototypical offense, that would be a rather paltry figure. Clemson’s Mike Williams, for instance, caught 70 percent of the passes thrown his direction last season.

But that’s the reality for this offense. Georgia Tech receivers mostly run vertical routes; they aren’t targeted until much further down the field. That’s also an improvement over his sophomore season in 2015, when Jeune caught 24-of-63 targets for 520 yards and a catch rate of 38.1 percent.

Ricky Jeune had 10 receptions of 15-plus yards last season; four of those occurred on third down with at least seven yards to go.

When Georgia Tech wins, Jeune is often a big part of the picture. When the Jackets struggle, however, Jeune gets lost.

There are obviously some confounding variables here, but in Tech’s four losses last season, Jeune had only seven receptions for 88 yards (12.6 per catch).

No matter what, though, Johnson knows that he has a total buy-in from Jeune, regardless of how many passes come his way. Jeune at media days: “Whether it’s a pass or blocking, I take pride in my blocking, so if I’m going 100 percent with blocking, then I’m already ready for when we pass it. Just being committed and going 100 percent.”

GT’s QB job belongs to Jordan, but Paul Johnson has options if needed