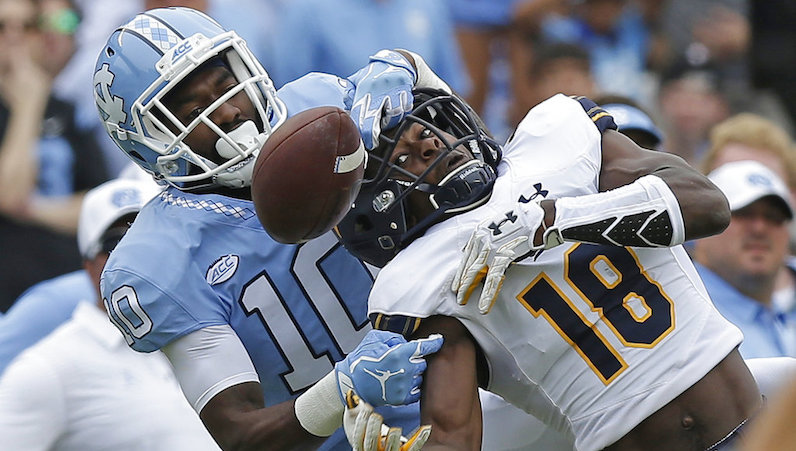 Let’s get right to the point: On Thursday, North Carolina announced that three key players — Andre Smith, Thomas Jackson and William Sweet — will miss the remainder of the 2017 season with injuries.

That’s tough for a lot of reasons — primarily for the players, obviously. Smith, Jackson and Sweet can’t play in a big chunk of games. Here’s what it could mean on the field for UNC, though.

Junior linebacker Andre Smith injured his knee late against Louisville, and didn’t even travel to Virginia for the ODU game.

That’s a big blow for a UNC defense that despite a lot of talent, has struggled in 2017. Smith played in just two games this season, but he is still tied for first on the team with 21 total tackles. In the win over California, Smith became one of just two ACC players this season to record at least 10 tackles and an interception, per Sports Reference.

On the season, Andre Smith is one of only 44 FBS players with at least 20 total tackles and an interception.

According to Football Study Hall, Smith has three run stuffs (runs stopped at or behind the line) this season — third on the team, behind only Malik Carney and Dajaun Drennon.

In the first half of the ODU game, Thomas Jackson suffered his injury; it will cost him the rest of the season — a bummer for UNC’s offense.

Through the first three games of 2017, Jackson had seven receptions on 13 targets and two touchdown. He was averaging 13.9 yards per catch, too.

Austin Proehl leads the Tar Heels in targets (21), receptions (15) and yards (223); several young receivers, tight ends and running backs have gotten involved in the pass game. The cupboard isn’t empty for Chazz Surratt (OR Brandon Harris), but Jackson is a quality veteran that will be missed.

William Sweet played in all 13 games in 2016; he played in the first three games of 2017, too. Sweet started at tackle for a banged up offensive line against ODU. Like Jackson, though, he was injured in the first half.

Bentley Spain and Cam Dillard are questionable for Saturday’s matchup with Duke’s potent defense. Despite the injures, Carolina’s line did a decent job protecting Surratt and Harris. According to Football Study Hall, both quarterbacks have sack rates under five percent.

The offensive line allowed a sack rate of just 1.7 percent on standard downs, too, which ranks 33rd in the FBS.