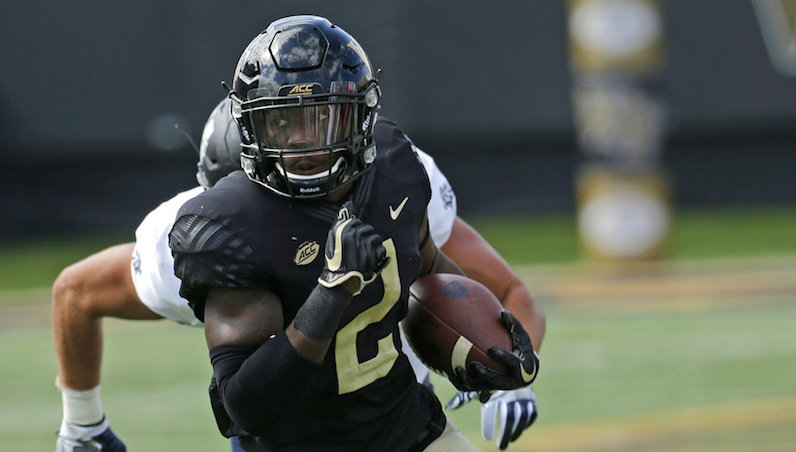 There’s no doubt that Clemson’s defense is one of the best in America this season. Through the first three games, the Tigers have turned opponents into pretzels; even the reigning Heisman Trophy winner Lamar Jackson couldn’t avoid demolition.

As good as Clemson has been on defense, especially along its defensive line, the Tigers actually rank second to last in the ACC in team interceptions. Clemson has intercepted just one pass this season, which came Saturday night against Jackson. Florida State is last; the Seminoles have played just one game (against freaking Alabama), but are yet to record an interception.

The two teams at the top of the list may surprise some: Duke (6) and Wake Forest (5).

In back-to-back weeks, different Demon Deacons collected the ACC’s Defensive Back of the Week honor. Two weeks ago against Boston College, Essang Bassey picked off a pass and recorded five tackles.

Then against Utah State, safety Cameron Glenn returned an interception (his second of the season) for a touchdown. The team’s other safety — Jessie Bates, an All-ACC selection in 2016 — has an interception, too. It’s a collective effort in Winston-Salem, clearly.

Shaka Smart isn’t the only one to embrace Havoc

Duke has two wins already over Power Five opponents — Northwestern and Baylor. Daniel Jones and the offense have collected the headlines; however, Duke’s defense has been outstanding.

The unit, coached by Jim Knowles, ranks No. 1 nationally in Havoc Rate, per Football Study Hall: 30.5 percent. Havoc Rate measure the percentage of plays that a defense records a tackle for loss, forces a fumble or defends a pass (interception, PBU).

Duke’s defense is making plays, and winning games. For instance, Linebacker Ben Humphreys sealed the deal against Baylor with a pick-six.

Wake Forest ranks 13th nationally in Havoc Rate; Virginia Tech is up there, too. The Hokies, with a Havoc Rate of 23 percent, are 12th among FBS programs. VT’s defensive backs, as a position group, have a Havoc Rate of 7.5 percent, which ranks No. 11 in FBS.

While the Tigers have just one interception on the season, the defense is still an absolutely destructive force.

Clemson’s defensive backs rank No. 119 in the FBS in Havoc Rate — 2.2 percent. Part of the equation: In the season opening win over Kent State, the Golden Flashes threw just five passes. However, this should probably just scare opponents even more.

The Tigers rank 33rd overall in Havoc Rate, and the team’s loaded secondary hasn’t even gotten in on the act just yet. In 2016, Clemson’s DBs posted a top-20 Havoc Rate.