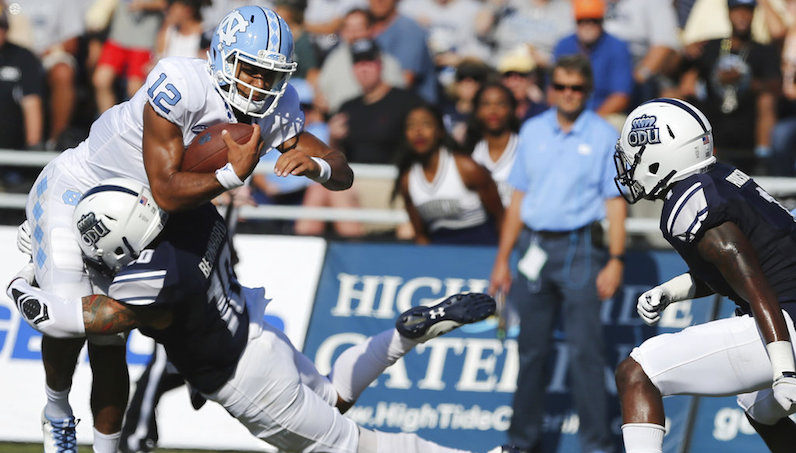 One of the biggest games in the ACC this weekend will take place in Chapel Hill — North Carolina (1-2)  hosts undefeated rival Duke (3-0). At the center of that matchup will be UNC’s redshirt freshman quarterback Chazz Surratt.

I challenge you to a dual…wait

Chazz Surratt gives Larry Fedora a promising run-pass threat at the quarterback position, which is exactly what North Carolina’s coaching staff craves. And despite his lack of experience and returning skill players, Surratt has found success, early.

Want to know just how good Surratt has been through the first three games of his career? Glad you asked. According to Sports Reference, Surratt is one of only two UNC quarterbacks since 2000 to complete two-thirds (66.7 percent) of his passes (minimum of 50 attempts), throw no interceptions and also run for at least three touchdowns in the first three games of a season.

The only other Tar Heels to do that in the last 18 seasons of football: Mitch Trubisky in 2016.

Getting the ball down the field

Starting with the Louisville game, though, that has changed. Surratt now ranks second in the ACC in yards per attempt: 8.9 — right behind another redshirt freshman, Virginia Tech’s Josh Jackson. The freshman has 12 completions of 15-plus yards, per cfbstats.com.

Against the Cardinals, Surratt completed 12-of-14 passes for 168 yards and two touchdowns — 12 yards per attempt. That continued in the Old Dominion game, when Surratt took the majority of snaps over Brandon Harris: 16-of-24 for 259 yards (10.8 yards per attempt) and another score.

In the win over the Monarchs, Jordan Cunningham and Carl Tucker both posted catch rates of at least 80 percent and averaged more than 15 yards per target.

After committing to the Blue Devils in April 2015, Surratt pivoted, and switched his commitment to UNC in June 2015. Duke coach David Cutcliffe says that there’s no bitterness, and it’s safe to say that with Daniel Jones, things worked out just fine at the QB position in Durham. However, it adds a little more zest to this weekend’s content.

Andrew Carter of the News & Observer reported on Twitter that Duke was notified by Surratt’s parent of his change of heart.

One thing of note entering UNC's game vs. Duke: Chazz Surratt said today it was his parents, and not him, who informed Duke of decommitment.

Surratt will also likely have to deal with a depleted supporting cast, too; UNC has been hit with a barrage of injuries. Key offensive players like Bentley Spain, William Sweet and Thomas Jackson are all nursing ailments, and could miss this Saturday’s game.

That may be a problem because Duke’s defense, which leads the nation in Havoc Rate (30.5 percent), has been great in 2017.

Do the ACC’s two most talented defenses rank last in interceptions?