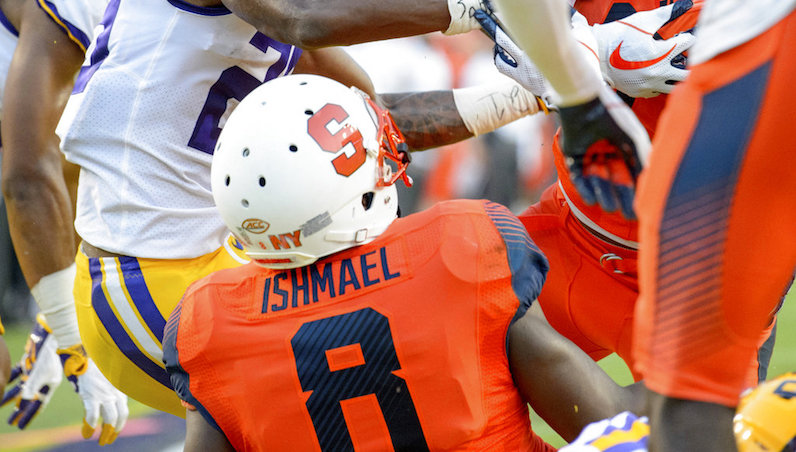 The Dino Babers-led aerial assault at Syracuse has a plethora of weapons; however, none are more explosive than Steve Ishmael — the nation’s leading receiver.

Syracuse quarterback Eric Dungey is one of nine FBS players with over 160 pass attempts so far this season. He’s targeted Ishmael more than any other pass-catcher for the Orange.

According to Football Study, Steve Ishmael has been targeted on 63 passes — the most in the ACC. On 38 percent of Syracuse’s pass plays, the senior wideout is the target. Ishmael has collected 45 of those targets for receptions — an efficient catch rate of 71.4 percent. His 45 catches rank No. 1 in the nation, too.

The departure of Amba Etta-Tawo left a void a the receiver position for the Orange; Ishamael has absolutely capitalized.

Ishmael — clearly a high-volume receiver in Syracuse’s go-go spread offense — is one of only four FBS receivers with at least 500 receiving yards.

In a league of his own — almost

Through the first month of the season, there have been five performances from ACC players of at least 11 receptions and 115 receiving yards in a single game. Ishmael accounts for three of those games, including last week at LSU: 11 catches, 123 yards.

The other two are Cam Phillips and T.J. Rahming. That’s quality company.

Is Syracuse’s improved defense for real?