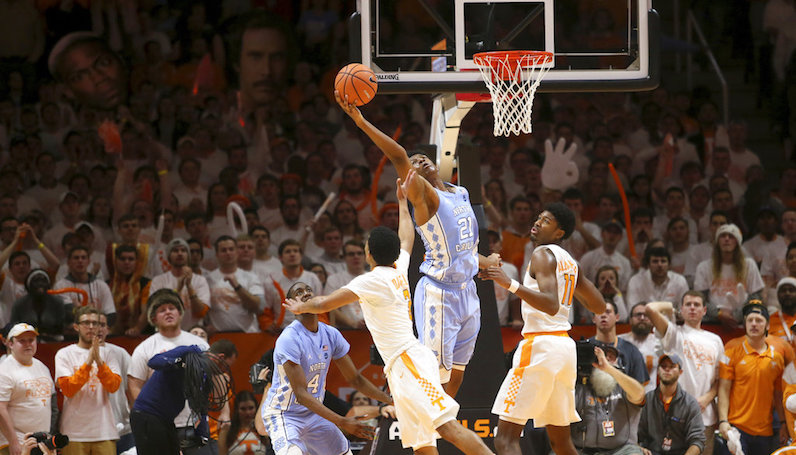 This, however, was also a strong game for two of North Carolina’s rookie forwards: Sterling Manley and Garrison Brooks.

Manley poured 10 points — the second double-digit scoring performance of his career. He also grabbed four offensive rebounds in 19 minutes — continuing an early-season trend. Over his first 11 games, Manley has snagged 16 percent of the available offensive rebounds while on the floor this season. That’s an offensive rebounding rate that rivals Kennedy Meeks from a season ago.

The 6-foot-11 freshman from Ohio is a big reason why North Carolina is on pace to rank inside the top 15 nationally in terms for offensive rebounding rate for a fifth straight season. There’s a lot to like about Manley’s game; let’s take a deeper look.

It hasn’t taken long for Sterling Manley to figure out where his value is maximized for UNC — at the rim. Part of what makes Manley such an appealing prospect is his length. Manley has blocked 6.1 percent of opponent two-point field goal attempts while on the floor this season, per KenPom. That’s No. 2 on the team, behind only Brandon Huffman.

Against Tennessee, Manley blocked fellow freshman John Fulkerson. That came a possession after Manley threw down a dunk off a feed from Brandon Robinson.

Including the Fulkerson rejection, Tennessee players shot 1-of-5 on attempts defended by Manley, per Synergy Sports.

That type of two-way play is exactly what UNC requires from Manley. He needs to work on his hands (24.6 percent turnover rate) — not every freshman can be Sean May; however, once he’s collected the ball, Manley has a soft shooting touch. According to Synergy, Manley is shooting 59.3 percent on non-post-up attempts at the basket — 1.3 points per possession.

Manley has also shot 50 percent on post-up attempts (8-of-16), and 70 percent on attempts following a basket cut (7-of-10), per Synergy. That interior production is the ideal compliment to the shooting of Williams and Berry, and Maye — a stretch-4 that can extend defenses out beyond the arc.

North Carolina is playing as fast as it ever has under Roy Williams. The Tar Heels rank 23rd nationally in adjusted tempo, per KenPom, and averaging just 14.5 second per possession — No. 8 in the nation. Part of that early offense is used to find spot-up looks for Kenny Williams, who continues to sizzles from deep: 88 percent effective field goal rate on catch-and-shot opportunities (No. 15 in the nation, No. 1 in the ACC).

With UNC, though, you can’t talk tempo without mentioning the secondary break. At the fulcrum of that break is a big man that can run the pipe and draw gravity to the middle of the lane. Sterling Manley is 4-of-5 shooting in transition this season, per Synergy. He knows if he runs the floor, a reward is likely.

Late in the first half against Tennessee, Jalek Felton found a sprinting Manley for an easy slam. This is bad transition defense from the Vols, but Manley simply outran his opponent.

Sterling Manley is one of only 13 Division I players to have attempted 30 or more free throws so far this season in less than 150 minutes of playing time. According to KenPom, Manley has drawn fouls at a rate of 7.2 per 40 minutes. For comparison, Virginia Tech’s Kerry Blackshear leads the ACC in free throw attempts (52). Blackshear draws an average of 7.5 fouls per 40 minutes.

Manley can create instant offense following an offensive rebound, too. He’s been fouled in the act of shooting on 33.3 percent on his put-back attempts, according to Synergy Sports.