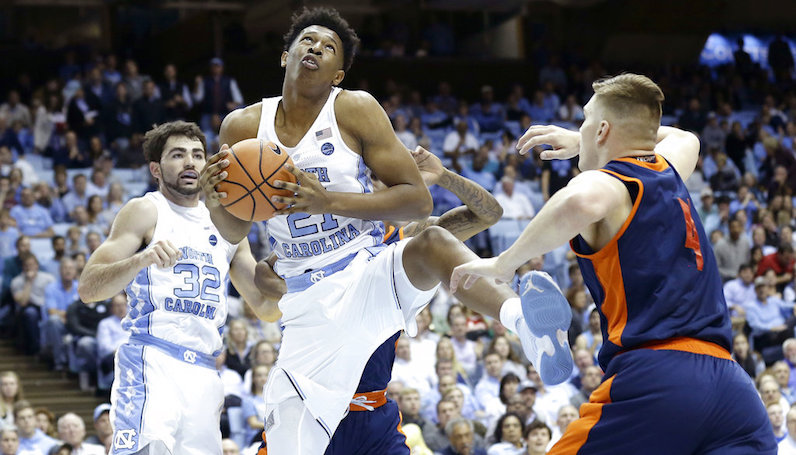 Big shoes — literally — were left to be filled along North Carolina’s frontline this season. Tony Bradley, Kennedy Meeks and Isaiah Hicks are gone — no duh. Outside of Luke Maye, and some small-ball options, the three most obvious replacement options are all freshmen.

After a few games of action, let’s take a glance at how the trio of Garrison Brooks, Sterling Manley and Brandon Huffman has looked.

The freshman from Alabama was one of the stars in UNC’s opener against Northern Iowa; the 6-foot-9 rookie scored 14 points (on six field goal attempts) and grabbed six rebounds.

Garrison Brooks is one of seven current ACC players shooting at least 75 percent from the field on 10 or more attempts, per Sports Reference. Brooks, who has an offensive rebounding rate of 20.3 percent, is a perfect 3-of-3 on post-up or put-back (after an offensive rebound) attempts, according to Synergy Sports.

Brooks is also a perfect 6-of-6 from the free throw line; he currently has an outstanding true shooting rate 80.8 percent.

While Garrison Brooks starred against Northern Iowa, Sterling Manley carried that torch in the win over Bucknell. In only 17 minutes of action, Manley collected 16 points and 13 rebounds. This was just the 19th time since the 2010-11 season that a player has gotten at least 15 points and 12 rebounds in under 18 minutes of play, per Sports Reference.

According to Hoop Math, 35.7 of Manley’s field goal attempts have come at the rim. He’s connected on every single attempt at the basket, too. KenPom has given Manley an offensive rating of 134.6 points per 100 possessions; his player efficiency rating (PER) of 46.6 would be No. 1 in the ACC.

The 6-foot-11 Manley, who powered through several lower body injuries in high school, has also played the most minutes of the trio, too: 31 minutes, 38.8 percent of UNC’s available game time.

Brandon Huffman has recorded only 13 minutes of game action for North Carolina; so like everything else here, it comes with the small sample caveat. However, Huffman has looked impressive, too.

Huffman — like Brooks and Manley — knows which real estate is most valuable to him. Five of Huffman’s six field goal attempts have come at the rim, per Hoop Math. He’s 4-of-5 on those attempts.

Lucky No. 7: UNC’s Seventh Woods opens 2017-18 with an efficient performance