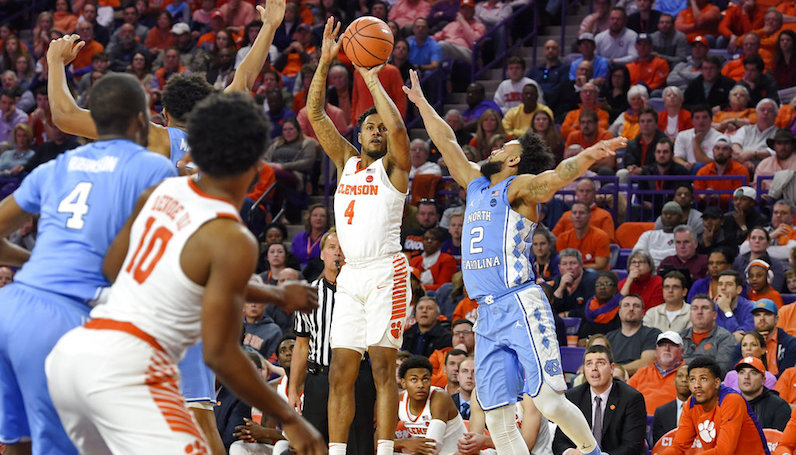 In Tuesday night’s loss to Clemson, North Carolina allowed the Tigers to shoot 15-of-30 from beyond the arc. It was the second straight game the Tar Heels allowed an opponent to go 15-of-30 on three-point attempts — NC State accomplished that feat, too.

Dating back to the 2010-11 season, UNC basketball has allowed opponents to make 15 or more three-pointers only four times; two of those games occurred in the last week. In the loss at Virginia Tech, things didn’t go great, either — the Hokies went 12-of-30 from beyond the arc.

From a raw defensive efficiency perspective, UNC's last 3 games have been its worst 3 of the season:

Virginia Tech, NC State and Clemson combined to attempt 199 field goal against the Tar Heels, and 90 of those attempts (45.2 percent) were of the three-point variety.

There’s obviously some randomness and bad luck here for UNC basketball; however, these types of performances are emblematic of a defense that’s had issues all season defending the arc.

UNC basketball ranks 139th nationally in opponent effective field goal rate — 50 percent, according to KenPom. That’s a decline from last season’s title team: 48.1 percent, No. 71 in the nation. If this sticks, it will be the worst effective rate of any North Carolina team since Roy Williams returned to Chapel Hill.

What’s sort of amazing about this: teams are shooting just 44.2 percent on two-point field goal attempts against UNC — No. 16 in Division I basketball.

According to Synergy Sports, North Carolina is holding opponents to just 46.6 percent shooting and 0.95 points per possession (No. 7 in the nation) on non-post-up attempts at the hoop.

On post-up attempts: UNC basketball has held opponents to sub-40 percent shooting, and 0.80 points per possession — a top-50 number in the nation.

However, that effective field goal rate is so high because the Heels are getting blitzed from beyond the arc. Opponents have connected on 38.5 percent of their three-point attempts against UNC; that ranks No. 315 in the nation, and is also the worst of Roy’s tenure in Chapel Hill.

North Carolina has given up 1.07 points per possession on spot-ups this season (55.7 percent effective field goal rate), which ranks 342nd in the nation, per Synergy. For a team with this much talent and experience, that’s hard to believe. And with this high effective field goal rate, it’s clear that spot-up triples are a real issue for Roy and UNC.

The Personnel: Something isn’t adding up

Justin Jackson’s departure to the NBA cost UNC basketball a talented and big perimeter defender. But with Theo Pinson and Kenny Williams in the fold, on paper, it would seem that UNC should have a strong perimeter defense. That’s not even factoring in that North Carolina frequently plays small — with four wings around one big, usually Luke Maye.

That should mean UNC has the ability to switch screens across the perimeter, and lead to fewer sieves around the arc. This hasn’t been the case, though.

When North Carolina is in it’s base personnel, though, they have been exploited, too. Teams are able to target UNC’s young big men in screen action off the ball, and it’s cause problems all over the floor. Take a look at two plays Dadgum Box Scores (an excellent follow) displays on Twitter.

On this first play, take a look at Aamir Simms’ flare screen on Andrew Platek; he effectively screens two players. Sterling Manley gets sucked in, too, which opens up the driving lane. That, in turn, forces Kenny Williams to stunt down on the drive, and now Marcquise Reed is wide open for the corner trey.

Next: It’s Reed again for the game-sealer. Clemson has UNC spread out, and Shelton Mitchell comes around a handoff from Simms. Everything on that side of the floor is dummy action, though. On the weak side, Elijah Thomas sets a pindown for Reed.

Thomas may get away with moving screen here, but Williams has no shot getting around it. Manley, just a freshman, needs a second to diagnose what’s happening here and sprint out to Reed. By that point, it’s too late.

Kenny Williams got caught behind a screen trying to defend it

On the whole, UNC’s transition defense hasn’t been very good this season; a big part of that: defending the arc — shocker, right.

The Tar Heels rank No. 301 in the nation in defensive efficiency on transition possessions — allowing 1.1 points per possession on 53 percent shooting. Amongst ACC teams, only Pittsburgh has allowed opponents to shoot a better number in transition.