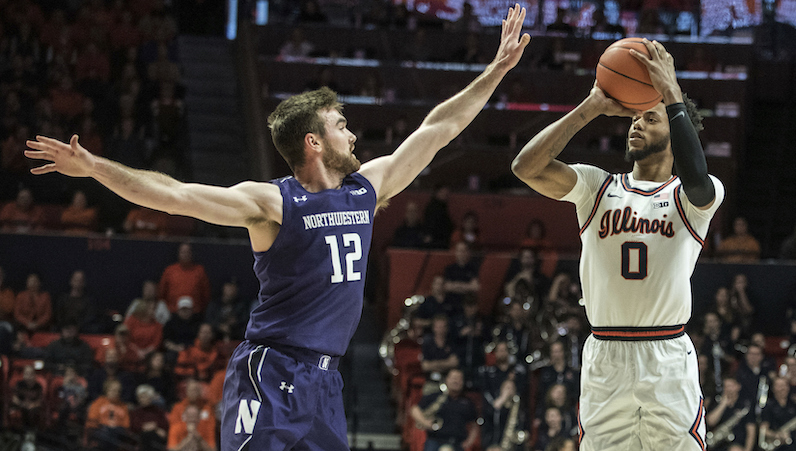 Over the weekend, Syracuse basketball landed one of the top shooters in the 2020 transfer portal: Alan Griffin.

As a sophomore this year, the 6-foot-5 Griffin appeared in 28 games (one start); he played 18.1 minutes per contest. Griffin averaged 8.9 points and 4.5 rebounds per game, while shooting 41.6 percent on his 3-point attempts. That efficiency came with good volume, too: 63.5 percent of his field goal attempts were from beyond the arc.

Griffin is one of the better shooters on the transfer market, especially off the catch. Of the 47 3-pointers he hit this season, nearly 90 percent (42) were assisted.

During the season, Griffin emerged as one of the most efficient players in the country; he shot 60 percent on 2-point attempts, too (68 FG% at the rim), and ranked No. 6 nationally in offensive rating, per KenPom. Griffin posted an effective shooting rate of 55.3 percent on catch-and-shoot attempts this season, a top 20 number in the Big Ten, per Synergy Sports.

With Elijah Hughes headed to the NBA Draft, Syracuse must replace his production from the wing. That may not be easy; Hughes was versatile weapon in the half court, capable of getting his own shot or facilitating for others (20.1 percent assist rate).

However, the emergence of Joe Girard (21.3 percent usage) is encouraging. It’s certainly looks like Girard is designed to be the program’s offensive engine — No. 6 in the ACC in off-dribble field goal attempts (118 FGA, 41 eFG%) — for the next few years. With Hughes gone, Girard’s assist (20.8 percent assist rate) and scoring numbers (21.3 percent usage) should jump.

Buddy Boeheim (20.8 percent usage) is a very good spot-up player (56.4 eFG% on catch-and-shoots this season), but even he showed some shot creation this season, too: 135 off-dribble attempts (41 eFG%).

Griffin fits the profile of what Syracuse needed to find this offseason; he will be a nice complementary piece next to Girard and Boeheim.

As of right now, Griffin will have to sit out the 2020-21 season with a redshirt — unless he receives a waiver to play immediately from the NCAA. Regardless of what happens here, though, Griffin still fits the timeline for Syracuse.

Girard is a rising sophomore. Boeheim has two more year of eligibility, too. Griffin will either get two seasons of playing with both Girard and Boeheim, or he’ll get one season with both, and two with Girard.

Quincy Guerrier, another rising sophomore, started to come on during the back half of this season; he has a chance to be a force in Syracuse’s zone. Give Guerrier some more time to develop, too, and he could become one of the better power forwards in the ACC.

The native of Montreal also shot 73 percent at the rim, and finished the year with 20 dunks: 1.22 slams per 40 minutes.

If Griffin is eligible for the 2020-21 season, a Syracuse crunch-time lineup of Girard, Boeheim, Griffin, Guerrier and Marek Dolezaj could be feisty.

Griffin emerges as one of the most efficient transfers in 2020