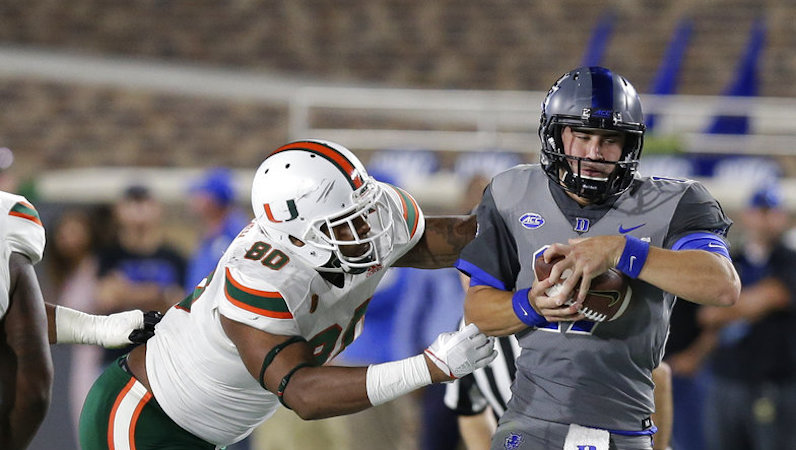 For Duke football to get back on track, and continue what could be a special season in Durham, the team’s offensive line needs to do a better job protecting quarterback Daniel Jones.

A sack lunch for Daniel Jones

Let’s start with a positive; the line has done well block for running backs Shaun Wilson and Brittain Brown. Wilson and Brown are both averaging over six yards per carry, and have Opportunity Rates north of 43 percent, according to Football Study Hall.

However, the issues have come in pass protection for Daniel Jones, especially the last three games.

On the season, Duke has allowed 16 sacks; that’s tied for worst in the ACC with Pittsburgh, and ranks No. 125 in the FBS. That’s resulted in a combined loss of 100 yards for Duke’s offense, per cfbstats.com.

It has intensified in recent weeks, too. The Blue Devils ran 93 plays against Miami on Friday night, per Football Study Hall. The Hurricanes sacked Jones on six occasions. The week before, the same issues occurred against a banged up North Carolina defense — another three sacks. Baylor sacked Jones five times as well. Do the math; that’s 14 sacks in the past three games.

Duke has especially had trouble setting the edge; the team’s tackles — especially grad transfer Evan Lisle — have had issues. The result: Opponent edge rushers have flown free, and made things tricky for Jones. That’s a major problem for Duke’s zone read scheme.

According to Football Study Hall, Duke has allowed a sack rate of 7.2 percent. That’s an increase from 6.3 percent in 2016.

A tale of two halves

Daniel Jones has tossed just three interceptions on the season; however, his quarterback rating and performance have declined, starting with the Baylor contest.

The Blue Devils went 2-1 in those games — with the lone defeat coming against a good Miami team — but there’s room for some concern here. Jones, who is a super talented player, simply hasn’t been as good as he was against Northwestern, where he looked like a first round draft pick.. Let’s just the splits.

The interconnections of offense

It’s not all on the offensive line, however. Daniel Jones needs to do a better job getting rid of the football. That, of course, is also connected to the receivers. T.J. Rahming and Johnathan Lloyd are quite productive, but they need to make sure to create quick separation, so Jones has some outlets.

It’s reductive to point out one player or position group as the cause for a singular issue. An offense has 11 guys on the field at one time. It’s a lot of moving parts. However, this collective effort needs to be set in motion soon, though. Immediately on the horizon for the Blue Devils: Virginia and Florida State.

The Cavaliers, according to Football Study Hall, rank 16th in the FBS with a sack rate of 12.5 percent on passing downs. The national average in these situations is 7.5 percent.

After that, it’s Florida State. The Seminoles haven’t been great getting after the quarterback this season, but FSU has been stout against the run, and that defense has so many freaky athletes. It’s playing with fire if Duke can’t protect Daniel Jones.

Duke should also consider some new offensive packages that involve both Wilson and Brown. The Blue Devils need to get as many playmakers on the field as possible. Plus, it would give Jones two checkdown options, too.

Healthy from the start, Duke basketball is already ahead of last season