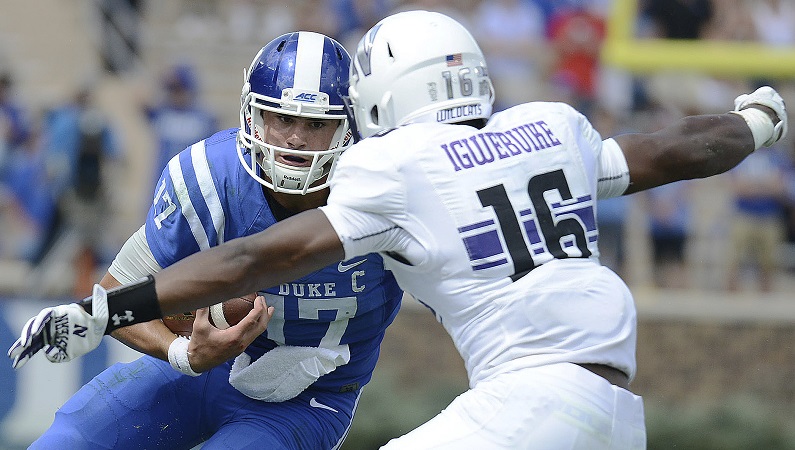 The better Daniel Jones plays this season, the more wins Duke is likely to rack up along the way.
That’s great for Duke football fans, right?

Well there’s a downside. The better Jones plays only increases the chances the redshirt sophomore quarterback will enter the NFL Draft when he’s first eligible next spring.

Through two games, that’s the path Jones is on. In Duke’s lopsided wins over N.C. Central and Northwestern, Jones has completed 68.6 percent of his passes (47 of 70) with four touchdown throws and one interception. Two of those touchdown passes came on perfectly thrown deep balls to Aaron Young and Chris Taylor.

He’s also averaging a healthy 6.35 yards per carry in those two games.

Last Saturday when Duke beat Northwestern 41-17, Jones executed his read-pass option plays with aplomb. He gained 108 yards on 16 carries with two touchdown runs. Since he threw for 305 yards, he became just the second player in Duke history with 300 passing yards and 100 rushing yards in the same game.

Standing 6-5 and having bulked up to 215 pounds, Jones used the offseason to increase his strength. Having started 12 games as a redshirt freshman last season, he saw what that extra bulk could do for him.

At the same time, Jones maintained his athleticism. Duke coach David Cutcliffe has consistently praised Jones for his speed, calling him the fastest quarterback he’s coached.

Jones also spent time on the practice field and in the film room with Thaddeus Lewis, Duke’s all-time passing leader who’s bounced around with several NFL teams since completing his college career in 2009. Jones also attended the Manning Passing Academy last summer where, at Cutcliffe’s insistence, he had long chats with Peyton Manning about quarterbacking.

Jones prepared his body and mind to be a better quarterback this season and, so far, he’s looked like the ACC’s best quarterback not named Lamar Jackson.

Eventually, NFL scouts will start taking notice. Many already have.

The question will be how high Jones is projected to go. If, like UNC’s Mitch Trubisky last season, Jones gets a first-round grade, he’ll have to leave.

At this point, that’s not the case.

A ranking of 2018 NFL prospects on CBSsports.com doesn’t have Jones listed among the top 11 quarterbacks. Right now, USC’s Sam Darnold, Oklahoma State’s Mason Rudolph and UCLA’s Josh Rosen are listed as the top three, followed by Washington State’s Luke Falk and Louisville’s Jackson.
There’s certainly no guarantee Jones will leave after this season. He has two more years of eligibility left following this season.

But if he starts putting up 300-yard games against ACC teams on a regular basis (which can only be good for Duke’s season), the chances of him playing at Duke next season will dwindle.