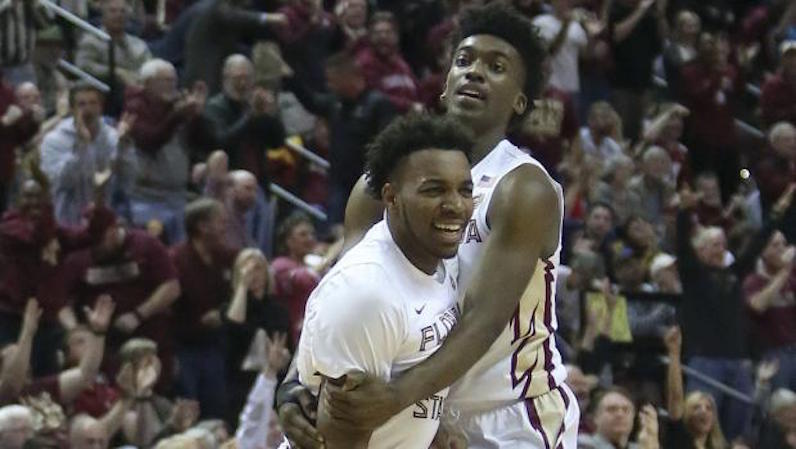 Florida State’s PJ Savoy gets a hug from teammate Terance Mann after hitting a three-pointer against Duke earlier this week. The Seminoles play at North Carolina on Saturday. (Steve Cannon/AP)

There’s something that’s truly remarkable about a person knowing what his or her strength are. The intersection of self awareness and talent: it’s a simple and powerful beauty.

There are few players in college basketball that have a better understanding of self than Florida State’s PJ Savoy. It’s why he’s become a favorite of ours at the ACC Analytics tab.

The junior guard put together a unique debut season for Florida State in 2016-17. Now, Savoy could be ready for a larger role.

However, even if he stays the same, Savoy will be a valuable piece for the Seminoles in 2017-18. Here’s why.

“I took advantage of my shot and now it’s raining”

When you think PJ Savoy, think three-pointers — lots of them, too. In 2016-17, only 16 ACC players shot 40 percent or better from downtown on at least three attempts per game. That list included Savoy, of course.

But that doesn’t quite do Savoy’s sniper mentality justice, though.

Dating back to the 1992-93 season, only two ACC players — Savoy and Keith Friel of Virginia (in 1999-2000 and 2000-01) — have shot at least 40 percent on three-pointers (at least three attempts per game) while also averaging less than one rebound and one assist per game.

Now that backcourt fixtures Xavier Rathan-Mayes and Dwayne Bacon are no longer in Tallahassee, though, Savoy may have to take on a large role.

According to Synergy Sports, 93 percent of Savoy’s field goal attempts in the half court came on jump shots. On the whole, 87.7 percent of PJ Savoy’s attempts from the field came from beyond the arc (100-of-114).

On catch-and-shoot possessions, Savoy was lights out. On 66 attempts, he posted an effective field goal rate of 63.6 percent. That was good for 14th in the ACC — better than Kyle Guy, Joel Berry and Luke Kennard.

Even though he didn’t do much other than shoot three-pointers, Savoy was an efficient cog for Florida State’s offense. Players that make a high volume of triples and don’t turn the ball over are the perfect compliment for high-usage guys, like XRM and Bacon.

Per KenPom, Savoy was tops on the team in offensive efficiency: 121.9 points per 100 possessions.

Where FSU stands with its top targets