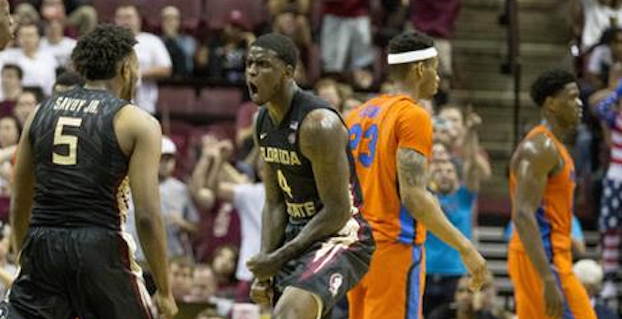 Everyone who follows the ACC knows just how good Florida State’s Dwayne Bacon and Jonathan Isaac are. However, this is far more than a two-man team; in fact, few coaches turn to their benches more than Leonard Hamilton. According to KenPom.com, FSU ranks No. 23 nationally in bench minutes. There are 12 players on the roster who have appeared in at least nine games and average more than nine minutes per game.

Freshman Trent Forrest and Jarquez Smith, a senior, play the heaviest share of minutes off the bench for the Seminoles. However, a little further down the pine, Hamilton possesses one of the ACC’s top hidden weapons: guard P.J. Savoy.

The 6-4 guard hasn’t been in Tallahassee long — he signed a Grant In Aid last August to join the program after playing for one year at Sheridan College in Wyoming. If he experienced culture shock going from the Great Plains to Florida’s Panhandle, it certainly hasn’t shown up in his performance. Savoy, in limited minutes, has quickly established himself as a gifted long-range bomber.

The sophomore has played just 85 minutes on the season, but in that small sample, Savoy has scored 71 points on just 51 field-goal attempts. This is wildly efficienct, which is why he scores so high in KenPom’s offensive rating metric — producing 1.26 points per possession.

That would rank as the No. 1 offensive rating in the nation if he had actually played anywhere close to the requisite minutes.

Savoy’s game speaks for itself; he’s a shooter and makes no bones about it. He has attempted 51 field goals on the season, and 46 of them have been of the three-point variety (90.2 percent). If that seems like a crazy high percentage, that’s because it is. J.J. Redick — the most prolific three-point chucker in ACC history — never posted a three-point attempt rate above 66 percent during his four years at Duke.

Savoy doesn’t really do much else other than shoot — he has just five assists and four rebounds on the season. But when you connect on 43.5 percent of your attempts from beyond the arc, who cares what else you add? That’s already a super valuable skill to offer up.

For Savoy, who posted a career-high 27 points on only 11 shots against Southern Miss, the name of the game is catch and shoot. According to Synergy Sports: on catch-and-shoots in the half court, Savoy scores 1.36 points per possessions, while shooting 45.2 percent on such attempts. When he’s left unguarded, Savoy heats up even more: 1.8 points per possession, 60 percent shooting. That ranks third in the ACC behind two of the conference’s premier sharpshooters, Tyler Lydon and V.J. Beachem.

For a comparison: Syracuse’s Andrew White III, who leads the ACC in three-pointers (51), is shooting just 31.3 percent on unguarded attempts and scores 0.94 points per possession.

The Seminoles, winners of 11 in a row, host Duke — sans Amile Jefferson, once again — Tuesday night. Florida State gets less than 25 percent of its total points from beyond the arc, which adds to Savoy’s value. The Seminoles rank 22nd in the nation in offensive efficiency; if Hamilton wants that to remain high, he will need Savoy to continue stretching the floor.