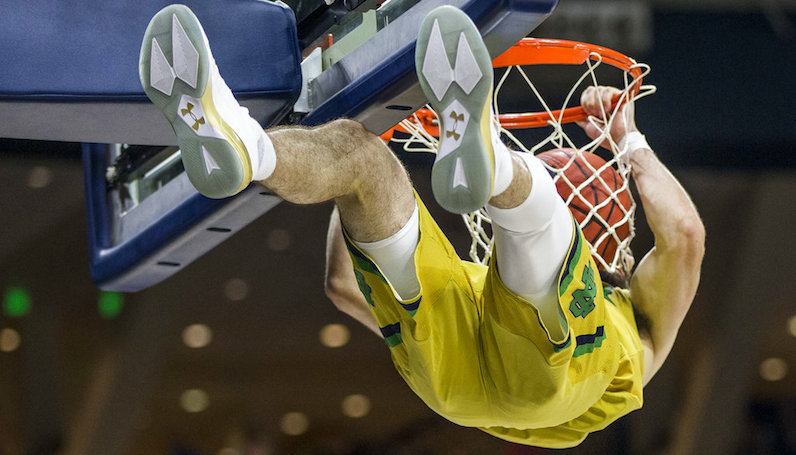 Notre Dame's Matt Farrell receives a technical foul violation for hanging from the rim on a dunk during the second half of an NCAA college basketball game against Chicago State, Thursday, Nov. 16, 2017, in South Bend, Ind. (AP Photo/Robert Franklin)

Notre Dame currently ranks No. 5 nationally in offensive rating, per KenPom: 115.6 points per 100 possessions. This is nothing new, though. The Irish have ranked inside the top 20 in terms of offensive efficiency in each of the last three seasons, including a No. 2 finish back in 2014-15.

Mike Brey’s now-patented four-out system is heavy on motion, screens and ball movement. The Irish can do just about everything on that end of the floor; it’s tough to think of an action that isn’t in the team’s arsenal. It’s a manifestation of talent, brilliant coaching and fun — as Matt Farrell and Bonzie Colson described it to me last month in Charlotte.

Where Notre Dame excels, though, is in its spot-up game. At the outset of the 2017-18 season, the Irish — led by senior guard Matt Farrell — are once again destroying opponents on the perimeter.

Matt Farrell and Notre Dame have opened the season against three lesser opponents; DePaul, ranked No. 128 by KenPom’s efficiency metrics, is the toughest team the Irish have seen thus far. An increase in competition will cause challenges, and a long season awaits; however, Notre Dame is red-hot out of the gate.

According to Synergy Sports, Notre Dame scores 1.38 points per possession on spot-ups — with an effective field goal rate of 67.6 percent. That’s absolutely sizzling. Another hallmark of a Brey offense is a low turnover rate. Well, Notre Dame is yet to record a turnover on a spot-up possession, per Synergy. The Irish have been shakier in the pick-and-roll game, though — with a 27.6 percent turnover rate, according to Synergy.

A season to remember and something to build on

The 2014-15 team was simply incredible; that bunch, which featured two current NBA rotation players — Jerian Grant and Pat Connaughton — finished the season No. 3 in offensive efficiency on spot-ups. That squad, which took then-undefeated Kentucky to the wire in the Elite Eight, also had future pro Demetrius Jackson at point guard, too.

It happened again the following season. In 2015-16, the Irish ranked No. 10 nationally in offensive efficiency on spot-ups. Over the last four seasons, Notre Dame has generally used a quarter of its possessions via spot-ups. However, the 2016-17 spent nearly 29 percent of its possessions on spot-ups — ranking 24th nationally in efficiency, per Synergy.

It may be hard to believe, but Matt Farrell and Bonzie Colson have been a part of all of these teams. Those two guys have combined to play in 189 games and log over 4,300 minutes for the Irish.

Farrell, once again, is lighting it up from beyond the arc; he’s one of four Notre Dame players shooting at least 38 percent on threes (minimum of four attempts). Promising underclassmen Temple Gibbs and D.J. Harvey join Farrell in a hot start, too.

So far this season, 21 ACC players have recorded at least 10 spot-up possessions. Obviously, it’s early. Amongst this group, though, Gibbs is tops in offensive efficiency: 1.67 points per possession. According to Synergy, 32 percent of Gibbs’ possessions are spot-ups. In terms of production, Farrell and Harvey aren’t far behind, though.

It’s also only a matter of time before Rex Pflueger, a good spot-up player, and Colson heat up from here, too. Right now, those two are a combined 2-of-11 (18.2 percent) on spot-up possessions, according to Synergy. The same applies for 6-foot-9 sophomore forward John Mooney, who just needs more minutes on the floor.

As a team, Notre Dame is shooting a shade under 43 percent on three-pointers — a top-50 mark nationally. That production around the interior force of Colson is the recipe for one of the most efficient offenses in the nation.

The competition will start to ramp up in the near future for Notre Dame, though. The Irish head to Hawaii for the 2017 Maui Invitational; after that, Notre Dame returns stateside for a matchup in the ACC/Big Ten Challenge with uber-talented Michigan State in East Lansing.

No take-back: The Hidden Secret of Bonzie Colson’s post game