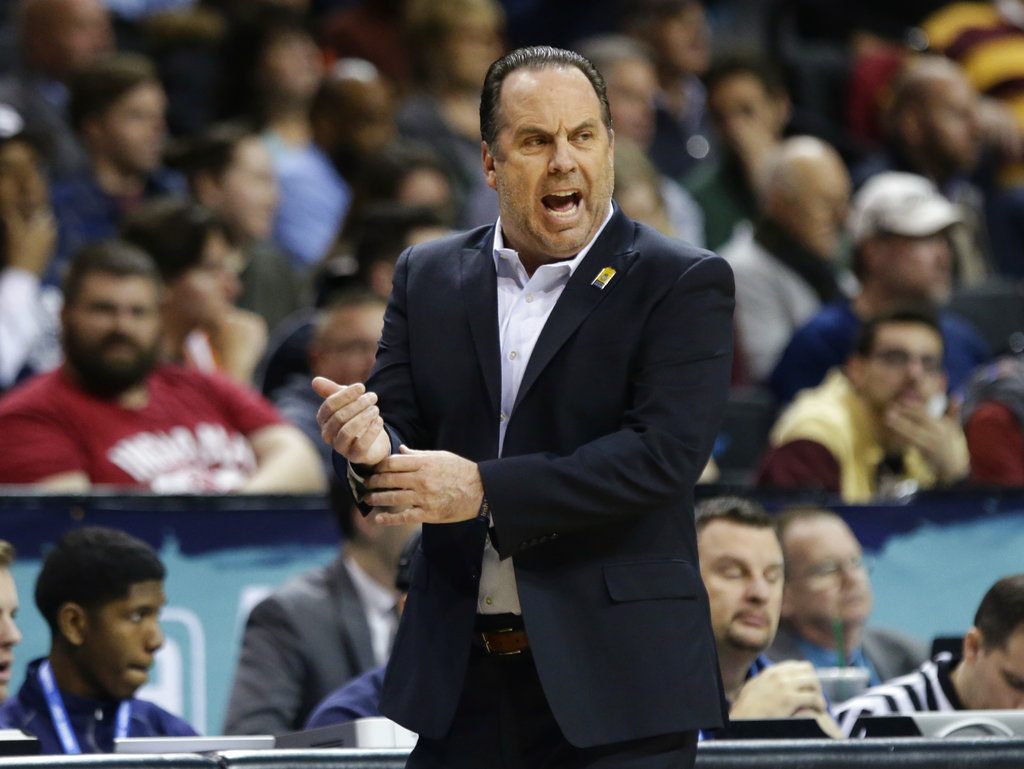 Notre Dame head coach Mike Brey calls out to his team during the first half of an NCAA college basketball game against Pittsburgh in the first round of the Atlantic Coast Conference tournament Tuesday, March 6, 2018, in New York. (AP Photo/Frank Franklin II)

I was on a plane back from Brooklyn the Sunday after the ACC Tournament. About halfway through the flight, a colleague of mine reached out across the aisle to show me something on his phone. The phone’s screen read out that Davidson had just upset Rhode Island to win the Atlantic 10 title, 58-57.

At that point in time, a few hours before the Selection Sunday reveal, you don’t know who, but someone just lost a bid to the 2018 NCAA Tournament. That team would turn out to be Notre Dame.

According to Bruce Rasmussen, Notre Dame lost a bid due to Davidson's win over Rhode Island in the A-10 Tournament.

During the first week of January, Notre Dame traveled to upstate New York, and defeated Syracuse 51-49. It was a comeback victory, down nine at halftime, and it came without the team’s two best players: Bonzie Colson and Matt Farrell.

The prevailing thought may be, “Well, how does one team get usurped by a rival that it beat?”

There’s certainly some logic to that approach; however, Bruce Rasmussen, the athletic director at Creighton University and NCAA selection committee chairman, claimed that his committee decided on Syracuse with a more broad approach — “That was one game of 33 that Syracuse played.”

We can debate the merits of RPI all day; I happen to be in the crowd that thinks it’s antiquated and inadequate, but I’m not on the selection committee; and it’s still a tool they prefer to use.

Syracuse has a superior RPI score to Notre Dame (46 to 69), and played fewer games against teams in the bottom 100 of RPI. That mattered, according to Rasmussen, along with the team’s four quadrant 1 wins.

A tough pill to swallow

Notre Dame coach Mike Brey described it as a “gut punch” to Tom Noie of the South Bend Tribune after the selection show on Sunday. Based on some of the other catch-all numbers, you can see why.

Jim Boeheim’s Syracuse squad got a bid over Notre Dame — despite noticeably inferior rankings with KenPom (54 to 31) and ESPN’s BPI (52 to 34).

According to KenPom, Notre Dame ranked 29th in strength of schedule; Syracuse, on the other hand, checked in at No. 43.

The Irish strung together a 20-win season, and hung tough despite not having All-American forward Bonzie Colson for 13 ACC games, due to injury. It’s easy to see why Brey would be verbally frustrated by the decision. Notre Dame was outmatched in the quarterfinals of the ACC Tournament by a loaded Duke team, but the Irish had won seven of its last 11 games.

Rasmussen claims the selection committee took a holistic approach to awarding Syracuse a bid over Notre Dame; that explanation, however, misses the mark, too.

Notre Dame basketball will take on Hampton on Tuesday, as the No. 1 seed, in the first round of the NIT. My belief, for this veteran squad, is that they aren’t done playing basketball just yet; they still want a few more weeks as a team — precious time that was robbed from them with Colson hurt for two months.

Mike Brey encouraged his team all season to just keep fighting; I heard him say that in the Bill Brill press room after a 22-point loss at Duke, back in January. Brey may be frustrated now, but he will have his team ready to roll against the Pirates.

Honestly, there may not be a better coach in America at getting his team to play loose and in the moment. Notre Dame basketball: disappointed, sure; defeated, hell no.

I will be glued to the Bonzie farewell tour https://t.co/YdLPEIPZie