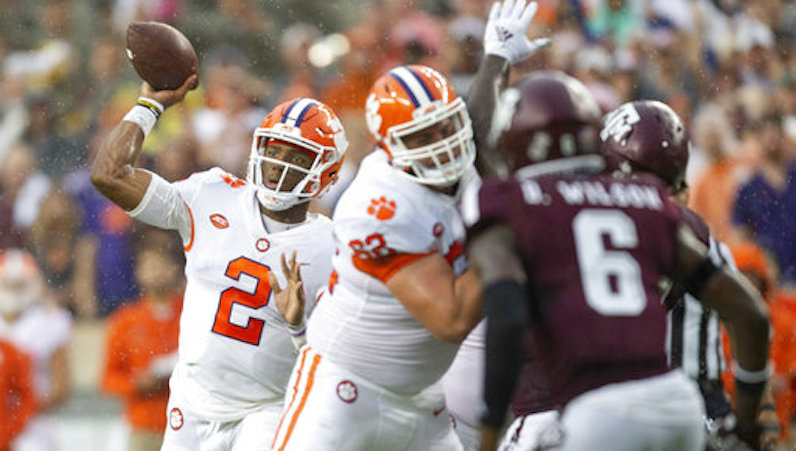 Last week The ACC Sports Journal started up its weekly ACC Football Power Rankings. After another batch of games, here’s where the league stands. With unbalanced schedules and a small sample size to work from, there’s still a lot to chew on, especially in the bottom-third of the league, which is a giant question mark.

Kelly Bryant was a stud vs. Texas A&M — 12.1 yards per attempt, two total touchdowns — Tee Higgins looks like a star in the making, too. (The Clemson coaching staff would be wise to remember: Kelly Bryant is good at football.) Clemson’s pass defense looked weirdly human against the Aggies: 430 yards, no interceptions, but two sacks Clelin Ferrell made a big difference. Regardless, this is easily the league’s top team — it’s not up for debate.

Next up: Georgia Southern

Don’t want to draw too many conclusions from a win over an FCS foe, William & Mary, but the Hokies are allowing just 64 yards per game on the ground to start the season — tops in the conference — and have forced seven turnovers so far, too.

Next up: East Carolina

The run game continues to underwhelm, but NC State’s loaded at receiver, and Ryan Finely continues to light opponents up on third down: 16-of-21 for 204 yards (five completions of 15+ yards) and 12 first downs. Can the Pack keep it up against high-flying WVU?

Next up: West Virginia

There will be a jump in competition starting this week, but so far BC has feasted on easy opponents: +82 in point differential, No. 1 in the ACC. AJ Dillon continues to impress: 9.5 yards per carry on the season, four touchdowns on 28 total touches.

Next up: at Wake Forest (Thursday)

This is a tough one: Duke has looked great this season, and is coming off a Power Five road win at Northwestern. But with cornerback Mark Gilbert out for the season and quarterback Daniel Jones out indefinitely, it’s hard to place this team. Gilbert and Jones are two of Duke’s three best players.

Next up: at Baylor

Breaking news: Greg Dortch is very good at football. In the win over Towson: 310 all-purpose yards, seven catches for 94 yards (on 12 targets) and three total touchdowns.

Greg Dortch had an impressive outing yesterday with 47 of his total receiving yards coming after the catch pic.twitter.com/2n0A4tp1YY

Next up: Boston College (Thursday)

Safe to assume: this isn’t the start Willie Taggart hoped for at FSU. The Seminoles gave up 535 total yards at home against Samford; if not for 15 unanswered points to close the game with a win, FSU would be in a world of trouble.

Georgia Tech was a slight road favorite against South Florida. Despite pilling up over 600 total yards of offense, though, they fell by nearly two touchdowns to the Bulls. This is what can happen when you allow back-to-back kickoff returns for touchdowns, which is exactly what the Yellow Jackets did.

Quarterback Eric Dungey continues to do his thing — tossing a career-high five touchdowns in an easy win over Wagner. Syracuse can score, no doubt, but we will learn more from this team in the coming weeks.

Good luck sorting through this portion of the ACC. Jaylen Smith caught his first touchdown of the season against Hickory High (a game delayed by lighting), but quarterback Jawon Pass looked pedestrian. Is Malik Cunningham the new man under center for Bobby Petrino?

Next up: Western Kentucky

The Panthers hung tough for a half, but No. 13 Penn State dropped 44 straight points on Pitt, and this turned into a blowout: 51-6. Penn State will do this to a lot of teams this season, though.

A good old fashioned rock fight in the rain — UVA couldn’t escape Bloomington with a victory. But the Cavaliers allowed just 20 points, and Bryce Perkins made some things happen, too. There are some positives to take from this defeat.

Ouch, from bad to worse. UNC was a two touchdown favorite heading into Greenville — with ECU reeling from a defeat the previous week to NC A&T. However, UNC threw up a goose egg in the second half and collapsed to the Pirates, 41-19. North Carolina is now -29 in terms of point differential, which is the worst in the ACC.