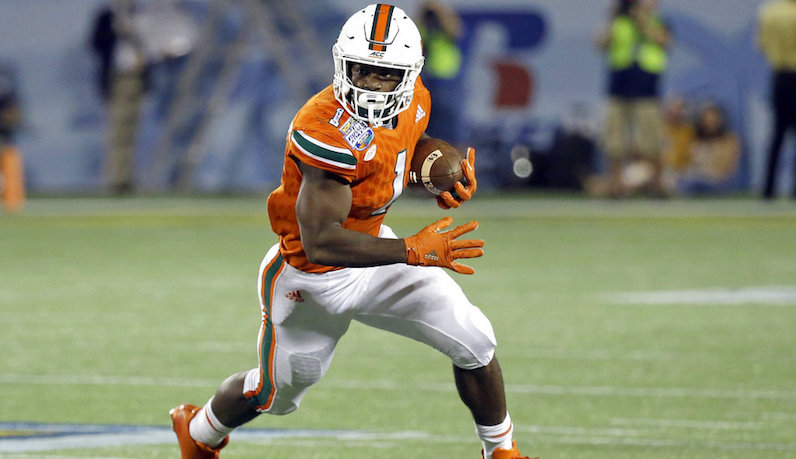 Miami running back Mark Walton (1) runs against West Virginia during the second half of the Russell Athletic Bowl, Wednesday, Dec. 28, 2016 (AP Photo)

Mark Walton is considered by most observers the best returning running back in the ACC. Last year he had more yards (1,117) and touchdowns (14) than any ACC player who didn’t win the Heisman (Lamar Jackson). He’s a dangerous receiver who can make spectacular grabs out of the backfield. He’s a solid, willing blocker and even throws his weight around on special teams.

If only Miami had two of him.

Walton’s health is the key to Miami’s offense, which is retooling after losing quarterback Brad Kaaya, tight end David Njoku and wide receiver Stacy Coley to the NFL. Those three top producers did their thing alongside a running back corps with Walton and backups Joe Yearby and Gus Edwards, two powerful, dynamic runners. Not only did UM lose Kaaya, Njoku and Coley, Walton’s emergence as the lead back caused Yearby to make a questionable decision to declare early for the NFL draft – he went undrafted and three months later, has yet to sign with a pro team – and led Edwards to transfer to Rutgers.

That leaves Walton, the 5-9, 205-pound junior who is likely bound for the NFL after this season. For him to get through this fall healthy and keep his draft stock high, he’ll need someone to emerge behind him.