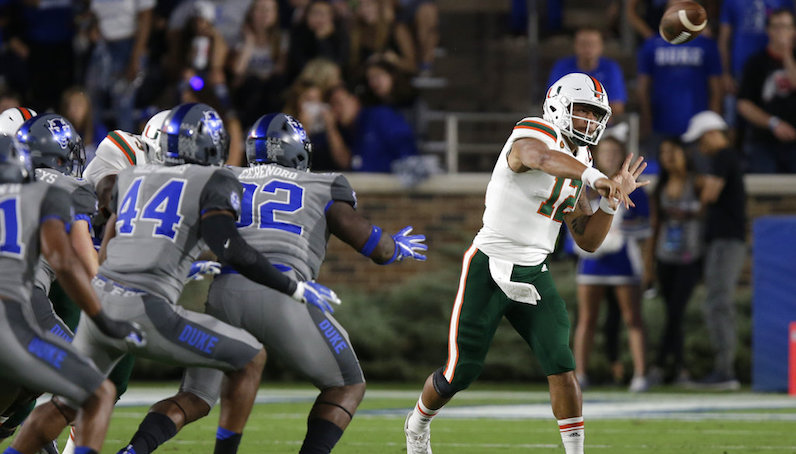 After Brad Kaaya decided to forego his final year of college, and enter the 2017 NFL Draft, Mark Richt was faced with selecting a new starter at QB. The second-year coach took his time; the process lasted all spring and summer.

In the end, though, 11 days before the season opener, Richt gave the job to Malik Rosier. The competition was arduous at times; it included the departure of another quarterback, Jack Allison. Rosier notably even had to beat out prized freshman N’Kosi Perry.

Three games into the season: It’s clear that Richt made the right choice.

In fact, he’s actually pretty good. Malik Rosier is 59-of-90 (65.6 percent) through the air this season for 820 yards and eight touchdowns.

Rosier is averaging 9.1 yards per attempts, which ranks second in the ACC — behind only Lamar Jackson; he’s one of only 18 FBS players averaging nine or more yards per attempt. The Miami quarterback ranks 16th nationally in terms of ESPN’s Total QBR — ahead of J.T. Barrett and Sam Darnold.

According to Sports Reference, Rosier is one of only two players with under 100 pass attempts, a completion rate above 65 percent, 800 yards or more passing and at least eight touchdowns. He wants to go down the field with ball.

Miami’s offensive line has done a terrific job creating holes for Mark Walton to sprint through. The unit has also done well keeping Rosier clean, too. According to Football Study Hall, Rosier has been sacked on just 5.3 percent of his dropbacks this season. That ranks seventh in the ACC amongst the league’s current starters.

The 6-foot-1 QB has worked well in the run game as well. If you add yards lost from sacks back in, Rosier is adding seven yards per carry; he also has two touchdown carries on the season, per Football Study Hall.

All of that for a first-year starter, who has also had to deal with a severe natural disaster that disrupted the team’s season, is very impressive.

Rosier has managed to spread the ball around, too. Five different Miami players have recorded at least 10 targets, per Football Study Hall. That group of players includes three wide receivers, a tight end and a running back. It doesn’t, however, include Ahmmon Richards…yet.

Richards, the freshman All-American last season, made his 2017 debut against Duke. Once again, he looked the part of a No. 1 receiver — four targets, three catches, 106 yards — which should help Rosier.

In his place, though, senior Braxton Berrios has been really good. Berrios has 10 receptions on 13 targets — a catch rate of 77 percent. He’s become Rosier’s preferred downfield threat; Berriors ranks second in the ACC in yards per catch — 19.2. Berriors also averages 14.8 yards per target.

The 5-foot-9 Berrios, with the help of Rosier, is one of only two ACC players with at least 10 catches, 18-plus yards per catch and three touchdowns.

Florida State is next up for Rosier, Richards and Berrios. The Seminoles are loaded with future pros, like Derwin James and Tavarus McFadden, but FSU has been susceptible to the pass this season.

If Rosier can find success against Florida State, the Hurricanes have a great shot of beating the Seminoles for the first time since 2009.

Why the return of Ahmmon Richards matters so much to Miami