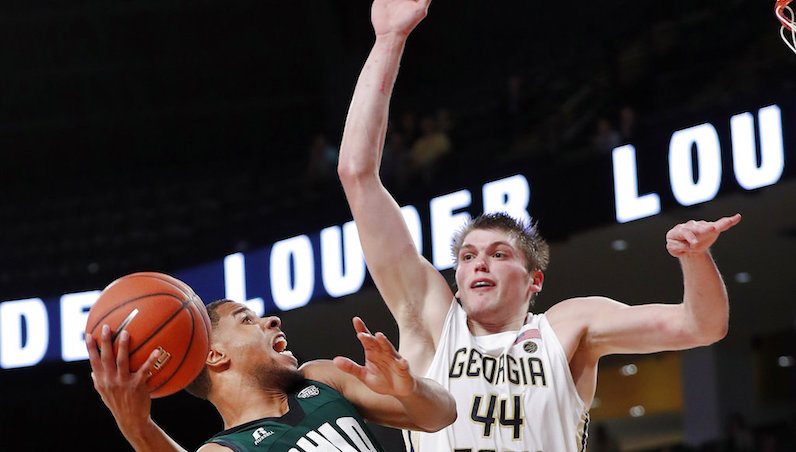 College basketball season is upon us. Which means it’s time to rejoice the return of slam dunks, buzzer-beaters and of course…interior defense. Yes, everyone’s favorite basketball-related topic.

According KenPom, four ACC teams finished inside the top 11 nationally in terms of adjusted defensive efficiency: Virginia (No. 2), Georgia Tech (No. 6), Louisville (No. 8) and North Carolina (No. 11). Not surprisingly, all four of those teams also did well defending the paint, too. Let’s explore a little bit more.

There are a variety of ways to build a good defense. Schemes and concepts will differ based on competition level and rules. However, regardless of league or age or conference or skill, the ability to switch and defend the rim will always carry weight.

The Golden State Warriors, basketball royalty, are the most famous and recent example of this. Golden State blitzed the NBA last season: ranking second in defensive efficiency and first in blocks; opponents shot under 60 percent inside of six feet against them.

Obviously, no one in college ball can achieve Golden State’s controlled chaos of defensive nirvana; however, several ACC teams are pretty good at containing opponents at the hoop.

According to Synergy Sports: Georgia Tech, led by Ben Lammers, was No. 1 in the ACC in terms of opponent field goal percentage and points per possession on non-post-up attempts (drives, cuts) at the hoop. Josh Pastner’s club ranked 13th nationally in this metric, too. The Yellow Jackets also led the league in block rate, per KenPom.

Louisville and Anas Mahmoud stand out here, too. The Cardinals are another rare team that recorded a block rate above 15 percent and held opponents to a sub-50 percent on this type of possession.

*Numbers from Synergy Sports and KenPom

These statistics aren’t perfect; there is some noise involved. This isn’t a panacea for paint defense. That said, there’s still plenty of value in observing and interpreting the numbers.

Not-so-friendly Postmates within the ACC

Now, how do ACC teams stack up on defending post-up possessions? Well, hey, glad you asked, thanks.

After seven straight seasons of ranking inside the top 20 in terms of defensive efficiency, Syracuse struggled last season. The Orange finished No. 119: 102.3 points per 100 possessions, according to KenPom. That’s the worst defense Syracuse has constructed in at least the last 15 seasons of basketball.

Syracuse did, however, manage to defend a limited number of post-up possessions well in its 2-3 zone. The Orange guarded only 47 post-up possessions in 2016-17, per Synergy. That’s just 2.7 percent of the possessions Syracuse defended last season. Post-ups are simply not a action teams want to run against a long-limbed zone.

Tony Bennett’s defenses over the years at Virginia have been excellent. The Cavaliers predicate a lot of that success a commitment to the Pack-Line defense — a defensive approach that emphasizes making post touches as challenging as humanely possible.

Isaiah Wilkins, Jack Salt and Mamadi Diakite all return for the team’s frontcourt, too. This should lead to another year of opponents throwing up bricks from the post inside of JPJ.

Colson, Hall top the list of the ACC’s most efficient late-clock players