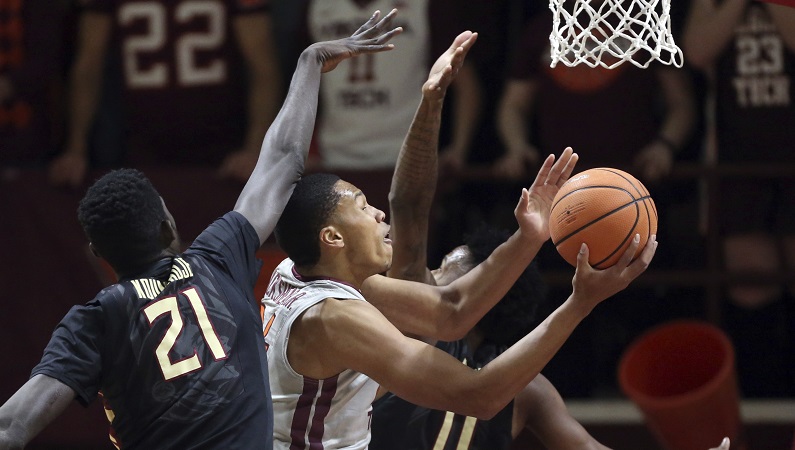 Kerry Blackshear Jr. (24) of Virginia Tech drives to the basket past Christ Koumadje (21) and Braian Angola (11) of Florida State in the first half of an NCAA college basketball game against Virginia Tech in Blacksburg, Va., Saturday, Jan. 20 2018. (Matt Gentry/The Roanoke Times via AP)

At 7-foot-4, Christ Koumadje brings an enormous wingspan, great shot blocking ability and an efficient secondary offensive weapon. Where Koumadje’s presence has been most felt however is on the glass.

In two ACC games prior to Koumadje’s return, the Seminoles were outrebounded by 11 boards per game. In the five games since his return, FSU has outrebounded foes by a total of 56 boards – an average of 11.2 per game.

Of Koumadje’s 31 rebounds since returning, 17 have been on the offensive glass. As a result, the Seminoles are now tied with North Carolina and Notre Dame for the ACC lead in offensive rebounds per game in conference at 15.7.

Given Koumadje’s size, length and ability to alter shots, one would think that the biggest difference he’s made would have been on the defensive end, but so far, that hasn’t been the case. In the five games since his return, FSU opponents are shooting 46 percent from the field and 37 percent from deep.

Since returning, Koumadje is averaging 9.6 points, 6.2 rebounds and 1.2 blocks per game while shooting 64 percent. That’s better than his season averages of 8.6 points, 5.5 rebounds and field goal percentage of 62 percent.

If Koumadje can maintain either his current statistical averages or his better averages since returning, it would be the best season for an FSU center since Bernard James averaged 10.8 points, 8.1 rebounds and 2.3 blocks during the 2011-12 season. The Seminoles went on to win the ACC that season. James went on to be selected 33rd overall in the 2012 NBA Draft.