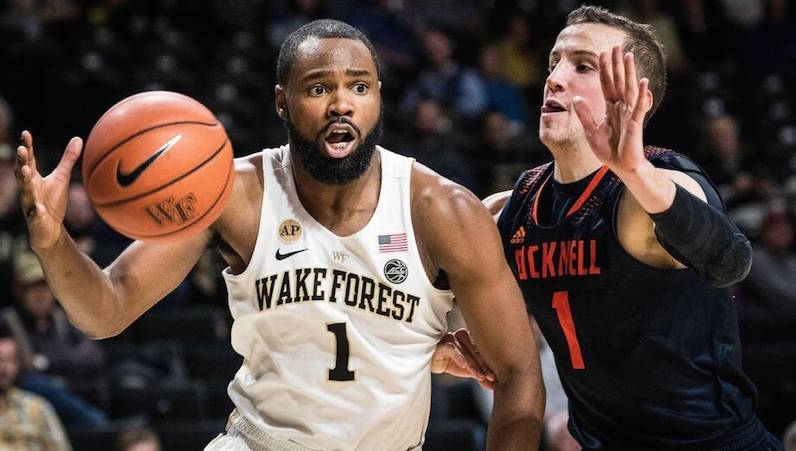 Keyshawn Woods will be counted on greatly for Wake Forest in the 2017-18 season. (AP Photo)

There are so many fun and worthy reasons to celebrate Wake Forest basketball this season — as the Demon Deacons lit up scoreboards and made it back to the Big Dance for the first time in seven years.

The hope in Winston-Salem is for the Deacs to carry that over to next season. That obviously gets a lot more challenging sans All-ACC power forward John Collins — now dunking on fools with the Atlanta Hawks.

Junior Bryant Crawford, one of the ACC’s best guards, is back, which is great news for Danny Manning. Crawford finished second on Wake’s roster a season ago in scoring (16.2 points) and usage rate (25.1%). Without Collins, expect Crawford to top those charts in 2017-18.

This means Wake Forest needs someone else to emerge as a go-to scorer, too; luckily for Manning and his staff, Keyshawn Woods is ready to roll.

Keyshawn Woods was the perfect spacing agent to slot around John Collins and Bryant Crawford pick-and-rolls. Woods and graduate transfer Austin Arians were dynamic floor spacers; both players attempted more than three three-pointers per game and shot better than 42 percent from distance.

According to Synergy Sports, Woods and Arians scored a combined 253 points on 203 catch-and-shoot possessions; that translates to roughly 1.25 points per possession.

Here’s how efficient Woods actually was, though. Per Sports Reference, Woods was one of only seven ACC players to score better than 12 points per game on fewer than 10 field goal attempts — while also shooting better than 40 percent on three-pointers.

That, my friends, is rather efficient. The only other players on this list: Luke Kennard, Bonzie Colson, Andrew White III, Matt Farrell, Ky Bowman and Seth Allen.

Woods also ranked second on Wake Forest’s roster and No. 191 in the nation in offensive rating: 117.7 points per 100 possessions, per KenPom.

More than just a shooting drill, though

Woods has some nice off-the-bounce juice to his game, too. He isn’t just a shooter. In fact, according to Synergy, Woods was a top five pick-and-roll scorer in the ACC.

As a redshirt sophomore, Woods was one of just five players in the ACC to score at least one point per possession on pick-and-rolls. He shot an impressive 54.4 percent on said possessions, and if he cuts down the turnover rate (17.9%), then he has the ability to raise that rating.

Woods functioned well as a passer in this action, too. Wake Forest shot 44 percent from the field after a pass from Woods out of the pick-and-roll, per Synergy.

This is one of the reasons why Woods averaged a career-high 3.5 assists per game and posted an assist rate north of 20 percent. Only a few players in the ACC hit both of those benchmarks a season ago.

Obviously, Wake Forest will desperately miss Collins in this department next season, though. Collins was the best pick-and-roll rim-runner in the nation.

O Defense, where art thou?

Wake Forest ranked No. 7 nationally in offensive efficiency this season; Duke was the only ACC team better on that end of the floor, per KenPom. However, things got shaky on defense.

The Demon Deacons ranked No. 176 nationally in terms of defensive efficiency. One of the team’s big problems was perimeter defense, especially on the pick-and-roll. Per Synergy: Wake allowed 0.83 points per possession to pick-and-roll ball handlers; that ranked No. 12 in the ACC.

Of course, it’s not all on Woods to fix this; however, Danny Manning needs a better collective effort from his guard and wing defenders next season.