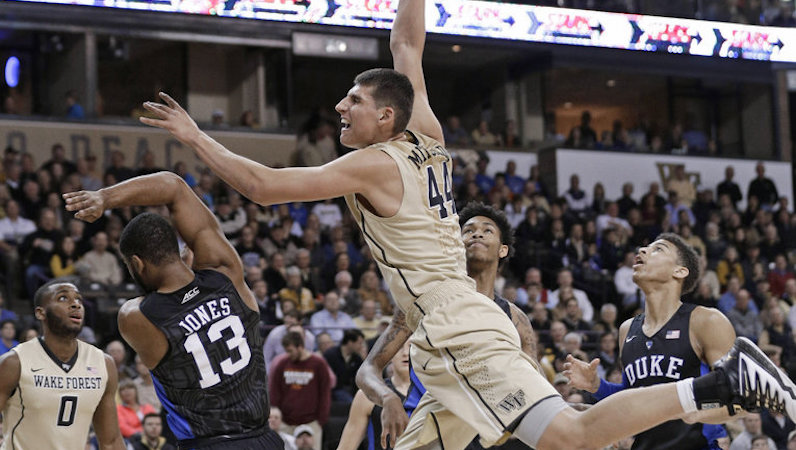 Wake Forest made the NCAA Tournament for the first time since 2010 this past season. John Collins, the team’s star big man and one of the best players in the country, led the Demon Deacons.

Following his All-ACC season, Collins declared for the 2017 NBA Draft. He has since decided to hire an agent and projects as a top-20 pick.

Danny Manning and his coaching staff built up some equity this season, but if Wake Forest is going to keep the proverbial ball rolling, then it will need to adjust for life after Collins. The lion’s share of that transition will be dealt to returning upperclassmen Konstantinos Mitoglou, Bryant Crawford and Keyshawn Woods.

Without Collins, Wake will obviously play through the post less in 2017-18. According to Synergy Sports, Collins recorded a massive number of post-ups this season; the star sophomore recorded an ACC-leading 246 post-up possessions. Without that low-post hub, it is unlikely that Manning runs the offense through the post.

Mitoglou does, however, provide an appealing option down low. Wake Forest will not be without an efficient interior scorer. Per Synergy, Mitoglou scored 1.01 points per possession on post-ups — No. 4 in the ACC among players with at least 30 possessions. Mitgolou shot 50 percent and drew a shooting foul 19.8 percent of the time. This is a strong number, which indicates that while Wake’s offense will be more perimeter-oriented, the Deacs will not be bereft of back-to-the-basket punch.

Wake Forest has to establish an interior threat not just because it is an efficient way to score points, but also because of what else it opens up.

In 2016-17, Wake Forest ball-handlers in the pick-and-roll — usually Bryant Crawford — shot nearly 41 percent. On spot-up possessions, Wake Forest scored 1.1 points per possession (No. 11 in the nation) on 40.5 percent shooting.

Crawford is back. So, too, is Keyshawn Woods, who made a splash in his debut season in black and gold. Top-40 recruit Chaundee Brown, a high-scoring 2-guard, will also be in town.

All of that is great. However, it is important to note just how critical Collins was to this success.

Collins was one of the best rim-runners in the ACC. His gravity moved and bent defenses in ways that freed up Wake’s shooters.

This is part of why Wake’s three-point percentage jumped to 38.5 percent this season — up from 31.6 percent in 2015-16. According to KenPom, Wake Forest’s offensive efficiency jumped more than 14 points per 100 possessions last season — a gigantic leap.

Collins made things easier for his teammates. Wake Forest built a top-35 three-point shooting offense off of a guy — Collins — who attempted just one three-pointer all of last season. There is a lot of perimeter talent on the roster, but it must find ways to establish Mitoglou, Doral Moore or incoming big man Olivier Sarr. That north-south action is how Wake Forest opens shooters on the weak side and elsewhere along the perimeter.