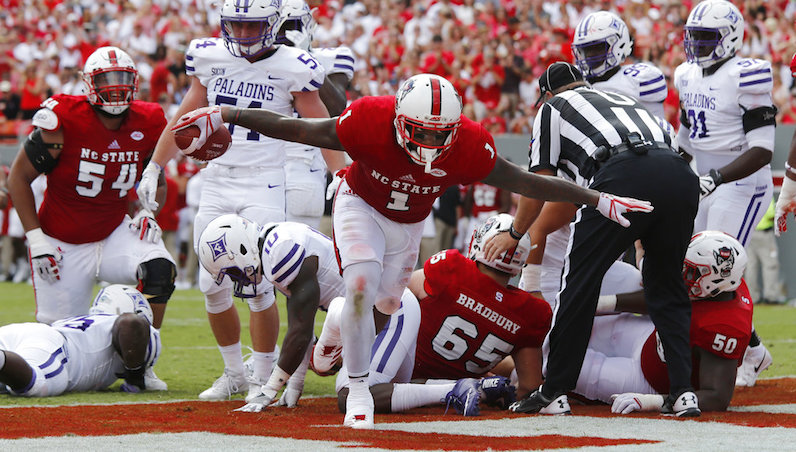 For the second time in his career, Jaylen Samuels scored three rushing touchdowns in the same game.

Yes, in NC State’s easy 49-16 victory over Furman, the Wolfpack’s all-purpose star once again made history — finding pay dirt three times on Saturday. Let’s look at why Samuels was so special this weekend.

A little more on what happened on Saturday for Jaylen Samuels

Behind a revitalized offensive line, Samuels collected his first rushing touchdown since November 2016.

Samuels carried the ball only five times, but scored three touchdowns on the ground. He’s one of just three ACC players since the 2000 season to score three touchdowns on five or fewer carries in one game. Samuels has done this once before, too — back in 2015 against Troy.

This was the 10th multi-touchdown game of Samuels’ brilliant career for the Wolfpack. NC State has a record of 8-2 in those game; the two loses came in the 2015 season against Clemson and Mississippi State. One of those eight wins includes last season’s win over North Carolina, when he threw a touchdown.

More standard records are on the horizon, too

As Backing The Pack points out, Jaylen Samuels has the opportunity to pen his name all up and down NC State’s career record book.

Samuels has 152 career receptions; this puts him only 48 catches shy of tying Jerricho Cotchery’s program record 200 receptions. Ryan Finley loves targeting Samuels — 24 in the first two games, per Football Study Hall; the senior will get his chances to climb this totem poll.

The 5-foot-11 Samuels has 36 career touchdowns — receiving or rushing. That, however, doesn’t factor in the TD strike he threw to Stephen Louis in last season’s win over UNC, but it’s tied with T.A. McClendon for fourth all-time in program history.