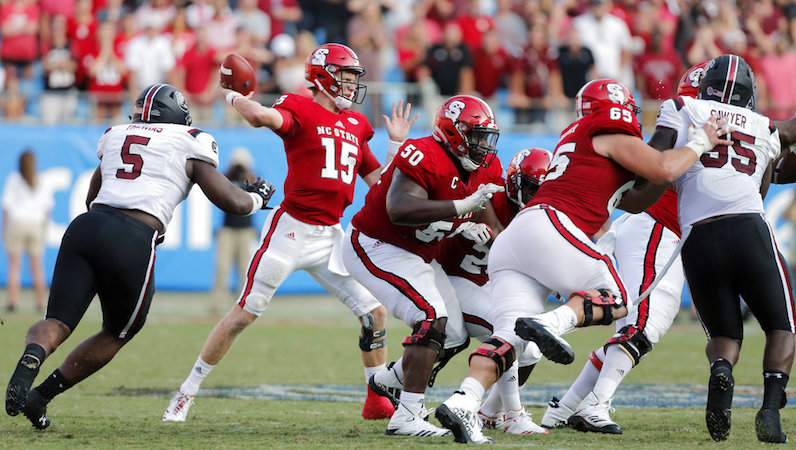 North Carolina State's Ryan Finley (15) gets his pass off as his line keeps the South Carolina defense contained except for South Carolina's Keir Thomas (5) who rushes in during the second half of an NCAA football game in Charlotte, N.C., Saturday, Sept. 2, 2017. South Carolina won 35-28. (AP Photo/Bob Leverone)

Maybe! Phillip Rivers back in 2003 was really darn good; the bar is set rather high, but out of the gate, junior quarterback Ryan Finley has been sensational for NC State.

NC State’s start to the 2017 season has been a bit shaky. After more than doubling up South Carolina in terms of total yards and suffering a historical loss, the Wolfpack returned home. However, the confines of Carter-Finley were anything but cozy Saturday night against Marshall.

The Pack trailed Marshall at one point 20-10, and needed 27 unanswered points to come out victorious.

Throughout the first two games, though, State has had one constant: the performance of quarterback Ryan Finley.

Finley has joined Lamar Jackson this season as two of the half-dozen ACC quarterbacks to throw for 700-plus yards in the first two games of a season, dating back to 2000. The only other NC State player to hit this benchmark is Phillip Rivers.

Efficiency: Thy name is Ryan Finley

Ryan Finley has completed 74-of-100 passes to start the season for 756 yards, five touchdowns and no interceptions. Finley and Virginia’s Kurt Benkert are the only two players in the nation to attempt at least 100 passes already, and not throw an interception.

It’s showing up in some of the more broad macro statistics, too. In terms of ESPN’s Total QBR metric, Finley (83.9) ranks second among ACC quarterbacks and No. 15 in FBS.

In the defeat to South Carolina, NC State ran a school-record 99 plays; Ryan Finley completed a school-record 45 passes, which went for 415 yards. All of this is great; however, much of the success came close to the line of scrimmage.

Yes, Finley was razor sharp on short passes against the Gamecocks, but against Marshall, State had a little more success down the field. (Hi, Jaylen Samuels!).

As Joe Giglio of the News & Observer does an excellent job detailing, Finley went a combined 4-of-5 for 115 yards and two touchdowns on passes 20-plus yards from the line of scrimmage.

One of those touchdown tosses came on a gorgeous reverse flea flicker that resulted in a 39-yard score for who else — Jaylen Samuels. This wasn’t even Samuels’ best work of the night, either.

The lesson, as always: Jaylen Samuels is very, very good at football.

While Finley has started to manage blending high-volume efficiency with some downfield explosiveness, he’s done well spreading the ball around, too.

There are currently 16 players in the ACC with double-digit receptions — led by Syracuse’s Steve Ishameal. Three of those players are member of NC State’s football team; Jalyen Samuels (20) and Kelvin Harmon (19) rank second and third, respectively, in the ACC in terms of receptions.

Redshirt junior Stephen Louis also had 10 receptions for 112 yards and a touchdown.

The concern now, though, becomes whether or not this pass-happy offense is enough to power NC State to the type of season that was expected in Raleigh. As the offense struggles to run the ball, Ryan Finley will have to keep dealing in the passing game.

NC State hosts Furman next week — the final tuneup before a trip south to Florida State.

NC State loses basketball commitment; where do they turn next?