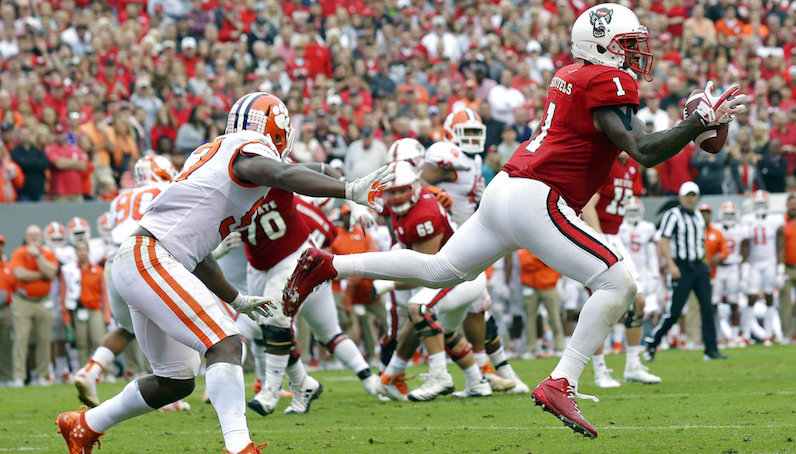 NC State is coming off a challenging loss at home to Clemson. Despite the defeat, though, Jaylen Samuels was once again brilliant: 93 all-purpose yards and two touchdowns — one receiving, one rushing.

This marked the fifth time in Samuel’s career that he’s scored a receiving and rushing touchdown in the same game. Samuels entered the ACC in 2014; since he joined the league, this feat has happened only 48 times, per Sports Reference. In that span of time, Jaylen Samuels is the only player to do this five or more times.

As NC State approaches the final few games on its schedule, it’s worth taking note of where Samuels ranks in the program’s record book. (Hint: check the top)

For his career, Jaylen Samuels has 185 receptions for 1,738 yards and 19 touchdowns. As of right now, Samuels ranks third all-time in receptions, 12th in receiving yards and fourth in touchdowns. There’s room for ascension here, though.

In terms of career receiving yards, Holt reigns supreme: 3,379 yards. Samuels currently sits with 1,738 yards. Samuels would need to accelerate his current rate to become just the sixth player in program history to eclipse 2,000 yards receiving, but that’s a milestone that’s in reach. Regardless, he will enter the top 10 in this metric, too.

With 19 career touchdown receptions, Samuels ranks fourth in NC State history; only Holt (31), Cotchery (21) and Jarvis Williams (20) rank ahead of him. Holt is obviously unattainable here, but Cotchery and Williams are easily in reach.

Think of it this way: by the end of his career, Jaylen Samuels could ranks first all-time in receptions, second in touchdown receptions and become one of six players in program history to hit 2,000-plus yards receiving.

Samuel’s 59 receptions this season already rank ninth most for a single season in program history. Three of the top 10 reception season in the history of NC State belong to Samuels (2015-17).

That’s insane, and yet somehow not even all of it. Samuels has recorded a reception in 37 straight games — a streak that dates back to his freshman season. Remember: Samuels has played in 46 career games. If Samuels collects at least one reception in NC State’s remaining three regular season games, he will jump Jerricho Cotchery and Bryan Peterson’s record for consecutive games with a reception, which sits at 39.

NC State at scholarship limit, but not done recruiting