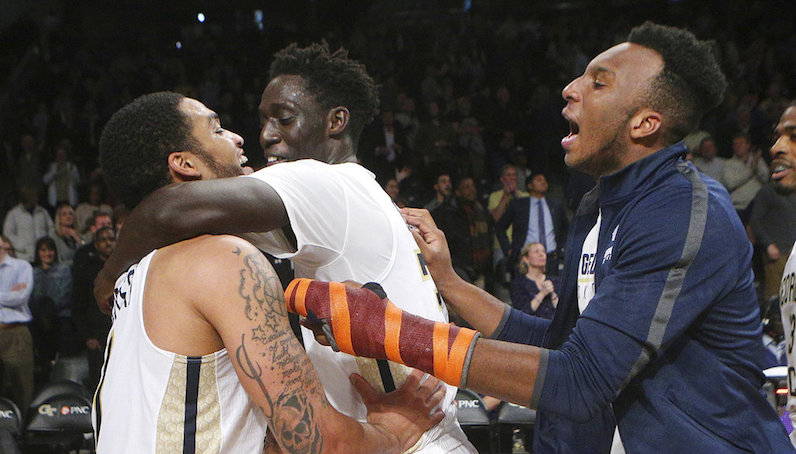 Things are not…going well with Georgia Tech basketball right now. After some positive preseason expectations and press, the wheels are close to coming off less than two months into the season. It started with Josh Okogie injuring his left index finger in the preseason; not long after that, Okogie and Tadric Jackson were suspended for accepting impermissible benefits.

Then details emerged surrounding Josh Paster’s relationship with friend and booster Ron Bell. A week later, the team’s season-opening trip to China was clouded with a loss, and LiAngelo Ball’s arrest.

After returning stateside, Tech seemed to find some balance. The Yellow Jackets won four straight games, including a buzzer-beating win over a good Northwestern team (man, it feels weird to type that).

Since then, though, not great: three straight losses. Grambling State, rated the No. 326 team in the nation by KenPom, defeated Georgia Tech in Atlanta. Less than a week later, Tech fell on the road at Wofford; the Terriers are ranked as the No. 207 team in the nation.

Georgia Tech’s defense has slipped a little from the top-10 unit of a season ago. Thanks mostly to Ben Lammers, though, the Yellow Jackets are still a top-40 defense. That’s good enough to win some games; in fact, Georgia Tech is the only team ranked inside the top 35 (No. 34) of KenPom’s defensive efficiency metric without a winning record.

The much larger concern comes on the offensive end, especially without Josh Okogie. Georgia Tech ranks No. 201 in the nation in offensive efficiency, per KenPom. But it’s so much more than just that one catch-all number. This team is struggling for just about everywhere.

In terms of adjusted tempo, the Yellow Jackets are one of the ten slowest teams in the country (64.3 possessions). Josh Pastner’s cutting offense is averaging 18.7 seconds per possession on the offensive end, which ranks 318th in Division I basketball.

Here’s a look at a variety of key shooting metrics, and where Georgia Tech ranks nationally.

On isolation and pick-and-roll possessions, the Yellow Jackets are a combined 17-of-53 from the field — 32.1 percent, according to Synergy.

Even when Georgia Tech does run, the results haven’t been very good. According to Synergy Sports, Georgia Tech is shooting just 41.8 percent and scoring 0.86 points per possession in transition. That ranks No. 323 in the nation in terms of offensive efficiency on transition possessions.

Jose Alvado, Curtis Haywood and Brandon Alston are all shooting under 50 percent on transition attempts.

Lammers has still been good, though

Despite the team’s struggles, Ben Lammers has remained an efficient offensive player. Georgia Tech is scoring just 0.73 points per possession on post-ups this season. That ranks No. 253 in the nation, and No. 10 in the ACC.

Lammers, however, is still getting the job done. According to Synergy, Lammers is shooting 43 percent on post-up attempts, and scoring 0.9 points per possession.

Lammers has remained efficient on non-post-up attempts near the basket, too. The senior is shooting 77 percent on these looks, and scoring 1.62 points per possession — No. 10 in the ACC.

Okogie, now cleared of suspension, and returning to health should be in the lineup soon — possibly by the end of December. That return can’t come soon enough for Georgia Tech.

Ben Lammers does whatever it takes to protect the paint, stay on the floor