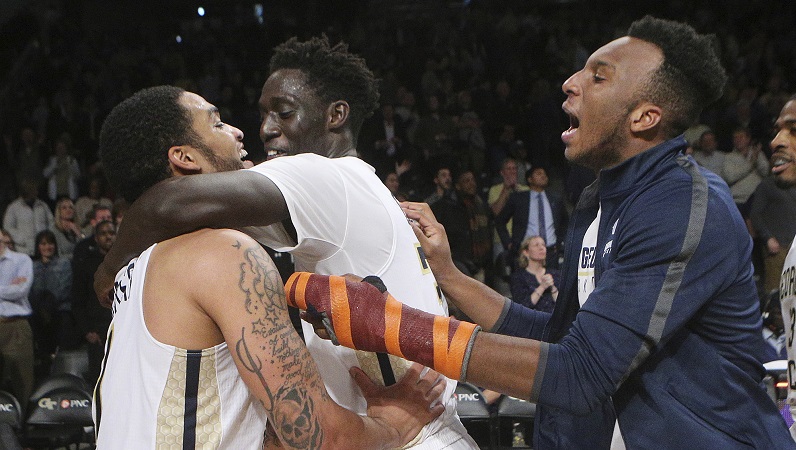 Georgia Tech is eagerly anticipating the return of sophomore Josh Okogie, who hasn’t yet appeared in a regular season game. Okogie was one of the ACC’s breakthrough rookies a season ago, averaging better than 16 points a game for the NIT finalist Yellow Jackets. If it weren’t for NC State’s Dennis Smith, Okogie would have made a strong case for ACC Rookie of the Year in 2016-17.

Okogie, who was suspended for the first six games for committing NCAA violations, has also been dealing with a variety of ailments to his left index finger. After accepting impermissible benefits in the form of plane tickets, meals, and apparel, Okogie has been missing out on practice with the finger issues. Okogie recently acknowledged that he’s planning to be back for Georgia Tech’s ACC opener Dec. 30, and the Yellow Jackets can’t get him back quickly enough.

Without its sophomore sharpshooter, Georgia Tech has struggled offensively out of the gate.

In Okogie’s absence, GT has gotten off to a 4-4 start, which includes disappointing early December losses to Grambling and Wofford.

Georgia Tech ranks dead last in the ACC in scoring, averaging just 63.9 points per game. The Yellow Jackets also rank 15th in the league in shooting percentage (42.4 percent). GT will also gladly welcome back Okogie on the boards, as the Yellow Jackets rank 14th in the ACC in rebounding (32.6 per contest). GT has been hampered not only by Okogie’s absence, but a nagging sprainked ankle that has been limiting All-ACC center Ben Lammers.

An open dislocation of Okogie’s left index finger, suffered in Georgia Tech’s late October exhibition against Georgia State, has developed into a full-blown infection. The bone healed up around the injury, but the subsequent skin infection has been a lingering issue for the sophomore.

The Yellow Jackets got an 11-day break following the Wofford game, and won’t return back to action until a home game with Florida A&M on Dec. 17. This will provide valuable extra time for Okogie to heal his injured finger, though he’s not expected to take the floor against the Rattlers.

Over the last two weeks of the calendar year, Tech has five games scheduled, including the ACC opener with Notre Dame in South Bend. Three of the contests – at home against Florida A&M, Wright State, and Coppin State – should go in the win column for Josh Pastner’s squad. A road game at UGA on Dec. 19 will provide a stiffer challenge.

Unable to work out at full strength for over a month, it will take Okogie several games to get his legs back under him, and to reestablish his stamina. It will be a challenge for him to match his freshman numbers. But for a Georgia Tech squad struggling to score consistently, Okogie’s return will be a bright spot in what has otherwise been a sluggish start.

Read more: Ben Lammers does whatever it takes to protect the paint, stay on the floor