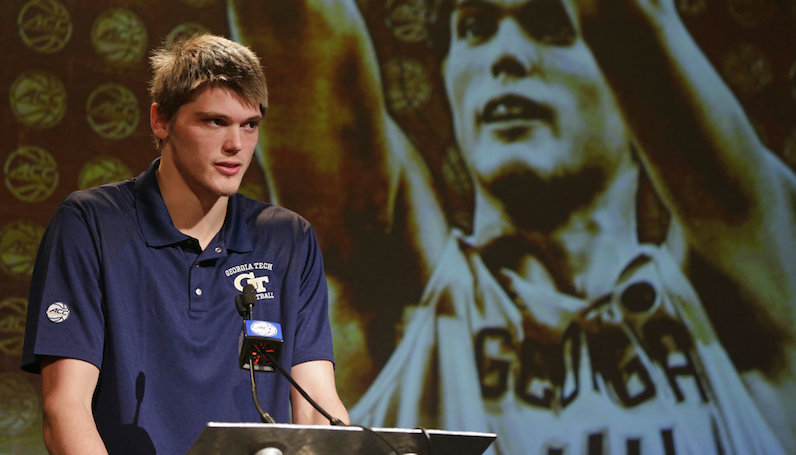 It is no secret that Ben Lammers is one of the best players in the ACC. The 6-foot-10 senior is an efficient low post scorer that can also facilitate from the elbows. What makes Lammers elite, though, is his ability to protect the rim on defense.

As a junior, Lammers put together an excellent season in terms of shot blocking. He rejected 10 percent of his opponents’ two-point field goals while on the floor. Lammers blocked 3.4 shots per game (125 in total), which led the ACC.

This level of defense is made even more impressive by Lammers’ ability to also avoid fouls. Georgia Tech needs him on the floor; he was the backbone to a defense that finished in the top 10 of KenPom’s efficiency rankings. Josh Pastner and his staff ask a lot from Lammers, and that includes playing heavy minutes. No matter — Lammers makes it work.

He’s not a gambling man, but if he was…

In 2016-17, Ben Lammers was the only Division I player to play at least 30 minutes per game, post a block rate of at least 10 percent and average fewer than three personal fouls per game. According to Sports Reference, he’s the only player to accomplish this in the ACC since the 2009-10 season.

Lammer was also the only center in Division I basketball to play more than 35 minutes per game last season, per Sports Reference. In 33 of the 37 games Lammers appeared in, he played at least 31 minutes. According to KenPom, Lammers played in 89.1 percent of his team’s available minutes, which is insane.

Seven players return to the ACC this season that posted block rate north of 4.5 percent and rejected at least one shot per game in 2016-17. Most of those shot block artists are also connoisseurs of the hack, too — it just comes with the territory of post defense. That, however, isn’t the case for Lammers.

Isaiah Wilkins is quite the defender, too, huh? Although it’s worth noting: Wilkins isn’t asked to anchor a defense and operate as his team’s offensive fulcrum. Lammers carries an enormous weight each and every night.

These trends have continued in 2017-18, too. In Georgia Tech’s season opener against UCLA, Ben Lammers played 38 minutes in China, blocked one shot and didn’t commit a single foul. UCLA players shot under 37 percent on attempts defended by Lammers, per Synergy.