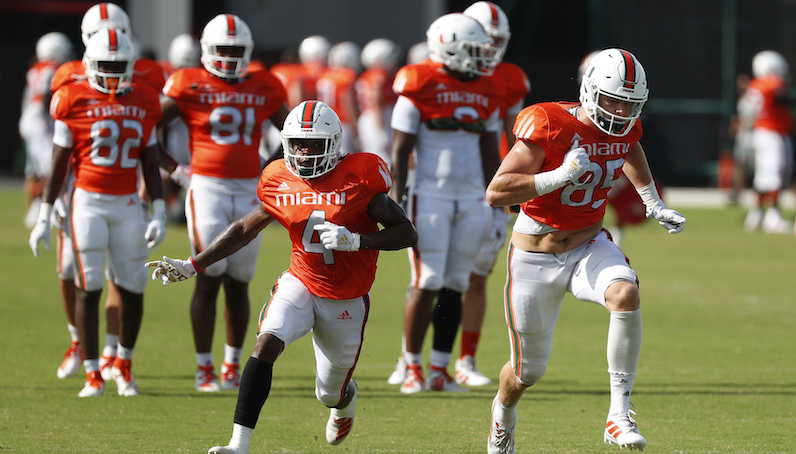 Less than two weeks out from the team’s opener, Miami named redshirt freshman Jarren Williams as its starter for the Florida game. This is a big deal for the Hurricanes and Williams, who beat out Tate Martell and N’Kosi Perry for the gig. It’s quite the challenge, too.

In his debut season at Florida, Dan Mullen led the Gators to a 10-3 record (No. 7 in the final AP Poll); his defense also finished the season ranked inside the top 15 nationally. When Miami and Florida meet on the field for the first time since 2013, the Gators will once again feature a powerful defense. Despite key departures — like Chauncey Gardner-Johnson, Vosean Joseph and Jachai Polite — Florida projects as a borderline top-10 defense, according to S&P-plus.

With that in mind, don’t be surprised to see Miami minimize its risks — a lower-variance type of approach seems like the right call: avoid turnovers, let DeeJay Dallas cook on the ground and hopefully the defense wins you the game.

However, when Miami turns to its aerial attack, there are plenty of options for Williams, who attempted just three passes last season, to target — starting with speedy all-purpose stud Jeff Thomas.

In only 11 games last season, Thomas emerged as Miami’s go-to man on the perimeter; he led the Hurricanes in receptions (35) and receiving yards (563). He ranked inside the top 10 of the ACC in terms of yards per catch, too: 16.1. Thomas hauled in 10 receptions of 20+ yards and eight catches of 25+ yards, too.

Can Jeff Thomas help get the Miami offense going this season? pic.twitter.com/nZV0DBS9AV

It was major news for Miami when Thomas, who initially decided to transfer to Illinois in the offseason, flipped his decision and returned to Coral Gables. Thomas was one of three players on Miami’s roster last season to account for at least 1,000 all-purpose yards; he averaged a monster 19.3 yards per touch, thanks to his handiwork on special teams, too. That ranked No. 1 in the FBS. (Thomas and Dallas were excellent in the punt return game last year.)

While Thomas is known for his acrobatic down-field grabs, he can make tough catches in traffic, too. Unsurprisingly, Thomas also led Miami with 11 receptions on third down. Of those 11 catches, seven went for at least 15 yards.

The much-hyped Jordan, rated as the No. 1 tight end in the 2018 recruiting class, delivered during his rookie season. Jordan cooled off some as the season progressed, due mostly to Miami’s passing game hitting the rails, but he still finished with 32 receptions (287 yards) on 48 targets (66.7 percent catch rate), both of which ranked second on the roster.

The 'Canes have a big target in Brevin Jordan. pic.twitter.com/EHDAAguAPy

Jordan’s signature freshman highlight came in Miami’s win over Florida State. Early in the fourth quarter, following a missed Ricky Aguayo field goal attempt, Perry, from a clean pocket (notice the double team on Brian Burns), hit Jordan, who beat DeCalon Brooks in single coverage, down the field for a 41-yard touchdown. The touchdown tied the game, Miami went on to win by one point.

After Michael Irvin II went down with a knee injury last August, Jordan became the guy at tight end for Miami. For his efforts, which included a two-touchdown performance against Savannah State, Jordan was named to various freshman All-American rosters.

Looking to add some experience to its wide receiver group this offseason, Miami did just that when the Hurricanes landed Buffalo grad transfer KJ Osborn. During his three seasons on the field with the Bulls, Osborn emerged as a productive receiver in the MAC; he has 96 career receptions and nearly 1,500 yards receiving to his name.

Along with Thomas and Dallas, Osborn could factor in on special teams, too; he returned 56 kicks and punts during the 2017 and 2018 seasons.

In Miami’s crowded backfield, Dallas competed for touches with Travis Homer during the 2018 season — carries and pass targets. Homer, now with the Seattle Seahawks, was targeted 25 times as a receiver last season, per Connelly’s data. Dallas, on the other hand, was targeted 11 times, which translated to 10 receptions (90.9 percent catch rate) and 85 yards.

With larger role now, and with plenty of speed and twitch to burn, perhaps Miami could look to involve Dallas in more screens this season.

With a young quarterback in Williams, these straightforward reads make a lot of sense: keep everything in front, focus in on only one receiver in a pattern.

After Thomas, Osborn and Jordan, Mike Harley is the most experienced wideout/tight end. In 2018, Harley was targeted 36 times (fourth most on the roster) — with 21 receptions (58.3 percent catch rate) for 240 yards.

After these guys, there’s still plenty of talent; however, it’s mostly inexperienced. Another sophomore tight end, Will Mallory, caught five passes — on nine targets — last season. Jordan and Mallory should form a dynamic pairing at tight end this season.

A trio of sophomore receivers — Dee Wiggins, Brian Hightower and Mark Pope — will factor into the mix, too. Pope and Hightower, especially, will be counted on to make a jump; both of those receivers graded out as top-150 prospects in the 2018 recruiting class, per 247 Sports.

Redshirt sophomore Evidence Njoku — one catch on four targets last season — brings a big body (6-foot-6) to the rotation; that could prove useful with jump-ball menace Lawrence Cager, who transferred to Georgia this offseason, now gone. The 6-foot-3 Hightower, who had knee surgery in April, also has appeal as a bigger receiver.

Cager isn’t the only wideout Miami lost to a program in Georgia, either; back in February, Marquez Ezzard elected to transfer to Georgia Tech. (Word could come this week of Ezzard’s eligibility for the 2019 season)

Jeremiah Payton, an early enrollee and the No. 10 wide receiver in the 2019 recruiting class, could also emerge as an impact player, too.