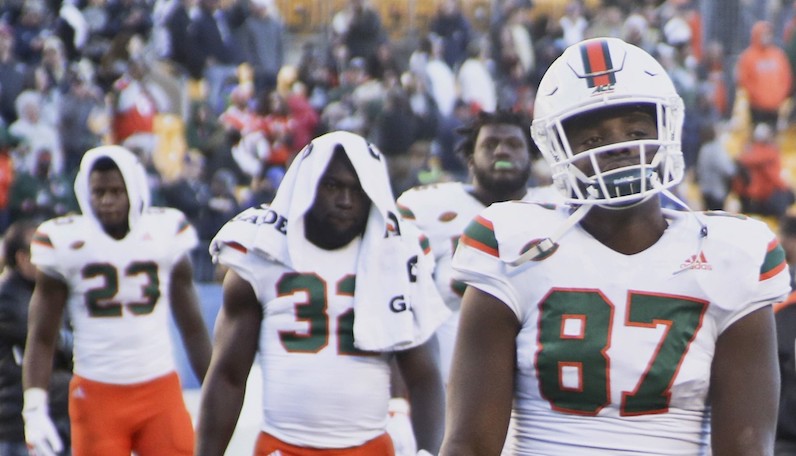 Miami announced on Wednesday (Aug. 8) that junior tight end Michael Irvin II sustained a knee injury; he will be out the next four months. Irvin will undergo surgery later this week on his right MCL.

The 6-foot-3 240-pound Irvin — a 3-star recruit in 2016 out of Fort Lauderdale — is the son of Miami and Dallas Cowboys legend Michael Irvin.

Irvin wasn’t a featured player on Miami’s offense in 2017; however, he did play in 12 games, making three starts. Playing next to Christopher Herndon IV, Irvin caught nine passes for 78 yards on 14 targets, per Football Study Hall. Irvin was targeted on just 3.4 percent of Miami’s pass plays.

However, with Herndon gone — now with the New York Jets — playing time was available at the tight end position. Herndon recorded 56 targets in 2017 — second most on Miami’s roster, behind Braxton Berriors. He caught 40 balls (71.4 percent catch rate) and was targeted on 13.8 percent of Miami’s pass attempts.

This should mean more playing time right off the bat for true freshman tight end Brevin Jordan. A product of Las Vegas, Jordan was rated as the No. 1 tight end in the 2018 class, according to 247 Sports composite ranking.