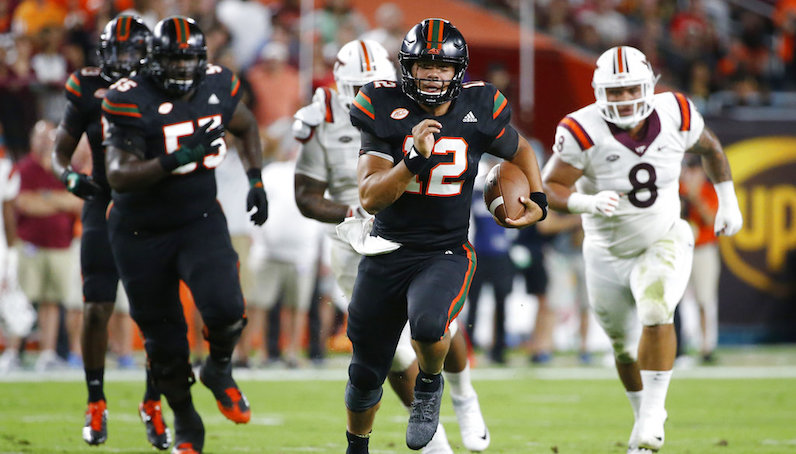 The most fun development of the 2017 college football season is the advent of Miami’s now famous Turnover Chain. By now, every fan of the sport must have seen the item in all its glory. The chain has become synonymous with Miami’s 8-0 start to the season, too.

It’s November, but the team’s list of accomplishments is rather extensive. The Hurricanes — in only year two of Mark Richt’s tenure — rank inside the top 10 of the AP Poll; Miami also checks in a No. 7 in the second CFP rankings of 2017. The ACC’s Coastal Division is theirs to lose.

Now, the eyes of the college football universe turn to South Beach this weekend for a matchup with No. 3 Notre Dame, a rivalry from decades past.

One thing, though: Can Miami cut its own turnover concerns for the showdown on Saturday?

Miami’s defense is alive and well in 2017; the Turnover Chain is a thing because, well, this unit forces a lot of turnovers. The Canes rank tops in the ACC with 13 interceptions, and fifth nationally with 1.63 interceptions per game.

Manny Diaz’s defense has also recovered seven of two fumbles forced this season, which is also No. 1 in the ACC, and good for a recovery rate over 58 percent.

However, Miami’s offense has started to have its own turnover isses, too, especially quarterback Malik Rosier.

Rosier has tossed seven interception this season — third most in the league — and fumbled the ball four times as well, per Football Study Hall. Things got particularly dicey through the air for Rosier against Virginia Tech. The Hurricanes dominated this game from the jump, so ultimately, the turnovers didn’t matter, but Rosier tossed three interceptions.

According to Sports Reference, that’s just the 11th time this season an FBS player has thrown at least three interceptions on 25 or fewer pass attempts. Brandon Harris is the only other ACC player to do this in 2017, too. It’s also the first time a Miami quarterback has done this since Jacory Harris did back in 2010…against Notre Dame.

While Rosier has put the ball on the ground four times this season, Miami has recovered each an every time. Miami has managed to lose only two of its seven fumbles, so far: a rate of 28.6 percent.

Football Study Hall projects that Miami should have a turnover margin of plus-4 at this point in the season; however, the Canes are actually plus-11 in this department. According to the site’s numbers, this has resulted an additional 4.3 points per game for Miami. That’s by far the most in the ACC.

Important to note: A lot is asked of Malik Rosier

The Hurricanes’ offense requires a lot from Malik Rosier, and thus far he’s delivered. Miami has dealt with a lot of turnover on offense. David Njoku, the team’s most talented offensive player a year ago, went to the NFL. Mark Walton has missed the last four games after suffering a season-ending injury against Florida State; Ahmmon Richards is in and out of the lineup, too.

This puts a lot of pressure on Rosier — a guy who attempted just 61 career passes prior to 2017. Even when Rosier struggles through the air, he contributes in the run game. Rosier has three rushing touchdowns; if you add yardage lost from sacks back to his season total, the quarterback has 355 yards on the ground.

We can spit out all of the numbers we want on expected turnover margin and point differential. Ultimately, this team is still undefeated, and it’s the second week of November. That’s pretty cool.

Can Miami keep this up? Or will the the Turnover Chain proved to be a cursed talisman in the end for the Hurricanes?

How a vacancy at UF impacts recruiting for the Hurricanes