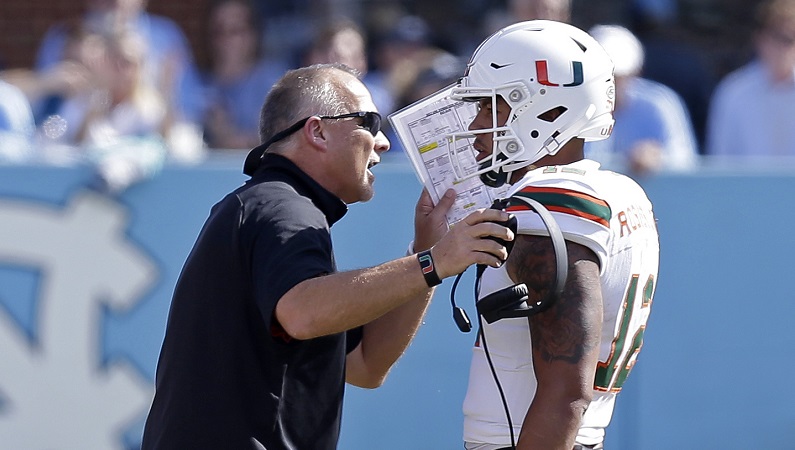 The Hurricanes had a chance to tune up for a couple of huge games, with last week’s game at North Carolina.

And in typical Miami 2017 fashion, they made it way too close, and nearly lost to a lesser opponent.

Close games have become a worrisome trend for this team, which has a chance to wrap up the ACC Coastal this weekend if it beats Virginia Tech and Virginia loses to Georgia Tech. Miami can also put itself in hot contention for a College Football Playoff spot if it follows that win by beating Notre Dame. Both games are at Hard Rock Stadium, which is sure to be fired up.

But losing either game would likely knock the Canes out of the race for a playoff spot, considering the way they’ve performed up to this point.

How you win matters to committee

The CFP selection committee has few hard-and-fast rules about how it chooses its final four, but its past performance in picking shows it cares about how teams win, and who they beat. Miami, even if it beats the two toughest opponents on its schedule in the next few weeks, is up against the wall in that regard.
Miami is 7-0 and one of four Power 5 unbeaten teams, placing it in a tier with Alabama, Georgia and Wisconsin. But the rest of the resume doesn’t stack up.

The Hurricanes don’t have a win like Georgia’s win over Notre Dame, which is considered the best win anyone’s had to this point.

The Hurricanes have played about as tough a schedule as Wisconsin; UM avoids ACC heavyweights Clemson and NC State, while Wisconsin ducks Penn State and Ohio State in the Big Ten. The Badgers have won all their games by eight points or more, and has won seven by at least two touchdowns. Miami’s only FBS blowouts have been over Toledo (a Toledo that is currently 7-1, but still a MAC team) and Duke. UM’s has won its last four games by a total of 18 points. The teams it beat – Florida State, Georgia Tech, Syracuse and North Carolina – are a combined 11-20, and only GT (4-3) has a record over .500.

Alabama, as always, is Alabama — crushing teams without seemingly trying. None of its games have been close. No team does what Alabama does.

Miami is flawed but its record is flawless, and as long as that continues, it will remain in contention. But its performance over the last month or so leaves many wondering: is the Hurricanes’ luck about to run out? Can it keep getting clutch plays and big breaks in crunch time? It would be one heck of a Cinderella story if so, a memorable season for program that second-year coach Mark Richt admits isn’t at a championship level in its construction or play.