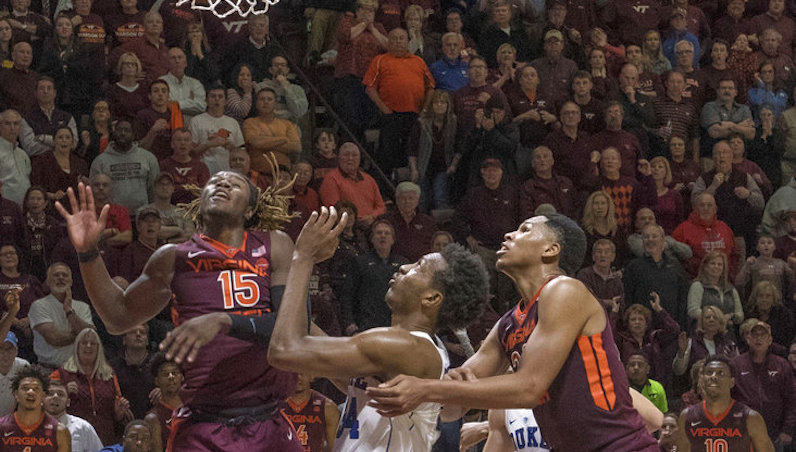 The 2018-19 season could be a special one in Blacksburg for Buzz Williams and Virginia Tech. The Hokies return most of their firepower from an offense that ranked 24th nationally in offensive efficiency against man-to-man defenses, according to Synergy Sports.

Point guard Justin Robinson will run the show, armed with a trio of shooters — Nickeil Alexander-Walker, Ahmed Hill, Ty Outlaw. Robinson is one of the game’s best at getting his own shot (60.5 eFG% on isolation attempts), and creating for others, too: 32.9 percent assist rate.

Up front, Kerry Blackshear Jr. — a skilled interior scorer (69.5 FG% at the rim, per Synergy) — also returns. Those are the ingredients for an outstanding offense; in 2018, the Hokies ranked No. 28 in the nation in adjusted offensive rating, per KenPom.

As nice as that nucleus of veteran players is for Virginia Tech, Williams can rest easy knowing he has one of the league’s top glue guys: Chris Clarke.

The runner-up to De’Andre Hunter for ACC Sixth Man of the Year in 2018, Chris Clarke brings so much to the table for Virginia Tech. Clarke, who become the first player in program history to record a triple-double back in 2016, can defend all five positions. In fact, he spend chucks of the 2017-18 season moonlighting as Tech’s de facto backup center.

At 6-foot-6, Clarke is an excellent rebounder, too, especially on the defensive end. When on the floor last season, the Virginia Beach native grabbed 24.4 percent of available defensive rebounds — a top-60 number nationally, per KenPom.

As he guards the post on one end, Clarke also functions as the team’s top secondary creator — behind Robinson. The slashing Clarke handed out 6.9 assists per 100 possessions last season; he was one of only 14 ACC players in 2017-18 to play at least 500 minutes, post an assist rate north of 20 percent and a steal rate of at least two percent.

In that group of 14 players, Clarke and the ubiquitous Theo Pinson were the only two forwards. He also posted the best true shooting rate — 62.6 percent, which is outstanding — of that collection. This was also his second straight season (over 1,500 combined minutes) with a true shooting clip above 62 percent.

Chris Clarke usually doesn’t miss when he shots — literally. This is due, in part, to location, location, location. Clarke doesn’t shoot much from deep; less than 14 percent of his career field goal attempts have come from beyond the arc. This isn’t to say that Clarke doesn’t have a shot; he posted a 56.9 eFG% off the catch in 2017-18, per Synergy. He just chooses to spend most of his time around the rim.

According to Synergy: Clarke shot 60.3 percent and scored 1.26 points per possession around the rim in the half-court. Factor in transition possessions, too, and 126 of Clarke’s 176 field goal attempts came at the basket — 71.5 percent. Less than 12 percent of his field goal attempts a season ago came from the midrange.

Does he work back into the starting 5?

So, now a senior: will Clarke move back to the starting lineup, or will he return as one of the ACC’s preeminent bench stars?

After starting 19 games in 2016-17 — a season cut short by an ACL tear — Clarke came off the bench in all 33 games last season. Devin Wilson, who started 11 of the final 12 games, exhausted his eligibility. Sweet-shooting Justin Bibbs (13.3 points, 9.3 3PA per 100 possessions), seen most recently with the Boston Celtics in Summer League, is gone, too.

Theoretically, multiple starting spots are open; it seems certain that Robinson, Alexander-Walker and Blackshear will hold down three of the five, with two vacancies.

Outlaw and Hill are two of the best shooters in the ACC, too. Hill, however, fell out of the rotation to close last season. The 6-foot-5 wing played just 15.1 minutes per game over the final 10 games of 2017-18 — all in a reserve role. In the team’s two postseason games, Hill played a total of 22 minutes, and attempted just five field goals.

Basically, the rotation will be set however Williams sees best fit. Clearly last season, Williams preferred Clarke as a backup — perhaps because he needed him to play minutes in reserve of Blackshear at the 5. With Khadim Sy back with the Tech program, there should be less need for Clarke to give minutes as the nominal 5, which could open him up to a starter role again. Regardless of who starts, you can bet that Clarke will help close plenty of games for the Hokies.