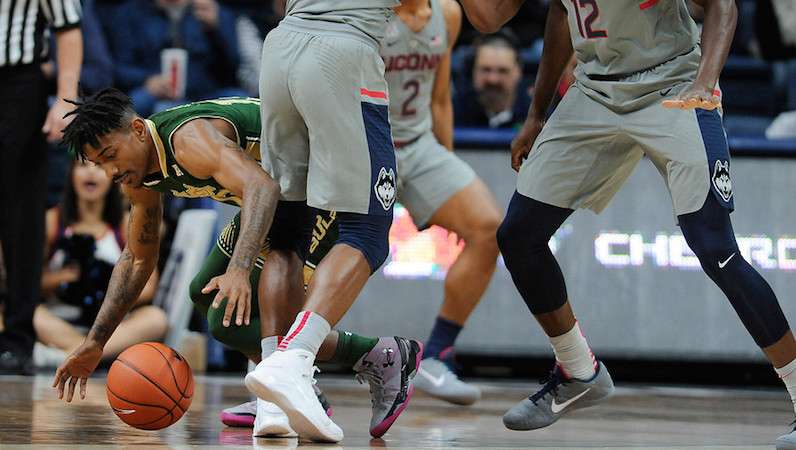 in the first half of an NCAA college basketball game, Wednesday, Feb. 8, 2017, in Storrs, Conn. (AP Photo/Jessica Hill)

One of the biggest additions of the transfer circuit this offseason belongs to Syracuse: South Florida graduate transfer Geno Thorpe.

The Orange will look rather different next season; seniors John Gillon and Andrew White III are gone. Two-year star Tyler Lydon is headed to the Denver Nuggets via the 24th overall pick in the 2017 NBA Draft.

Syracuse won’t have to start from scratch per se. Sophomores Tyus Battle and Taurean Thompson are ready for much larger roles. This is critical, especially after Syracuse lost out on four-star forward Jordan Tucker to Duke.

Jim Boeheim had to work the transfer market. East Carolina transfer Elijah Hughes must sit out the 2017-18 season; Geno Thorpe, however, is ready to help now.

Syracuse had one of the top spot-up offenses in all of America this season. In fact, according to Synergy Sports, the Orange ranked No. 12 nationally in offensive efficiency out of spot-ups: 1.09 points per possession. As a team, Syracuse connected on 38.1 percent of its three-pointers — a top-50 metic, per KenPom.

It should come as little surprise that the Orange boasted two of the best perimeter shooters in the ACC, then. White and Gillon ripped nets in 2016-17, no doubt. However, on a smaller sample, Geno Thorpe was actually more efficient on catch-and-shoot possessions.

White was one of just six Division I players to record over 200 catch-and-shoot possessions; that’s a ridiculous volume of attempts. But Thorpe scored more points per possession on a higher effective field goal rate.

There’s more room on that plate

Each and every season of his collegiate career, Thope has attempted and connected on a higher percentage of three-pointers. In 2016-17, more than 29 percent of his field goal attempts originated from beyond the arc. Back in 2013-14 — his freshman season at Penn State — less than 18 percent of his shot attempts were three-pointers.

Geno Thorpe may be hard-pressed to get to White’s All-ACC levels, but he will see his spot-up numbers climb once he puts on that orange and white uniform.

A bonus for Syracuse, too: Thorpe’s ability to shoot off the bounce. Per Synergy, Thorpe shot a solid 34.4 percent off the dribble this season.

This season at USF, the 6-foot-4 Thorpe emerged as a high-usage pick-and-roll player. Thorpe, according to Synergy, used nearly 32 percent of his possessions via the pick-and-roll. He shot 35.4 percent from this action, and scored 0.77 points per possession. Not great, but certainly not bad. Thorpe and Thompson could form a potent two-man battery for Jim Boeheim’s club.

South Florida was far from an efficient club on offense, and that’s putting it mildly. According to KenPom, the Bulls ranked No. 313 nationally in offensive efficiency. Thorpe, however, was the only player on the roster to play more than half of the team’s available minutes, and post an offensive rating above 100 points per 100 possessions.

Thope has a knack for finding easy points. He attempted 4.4 free throws per game (7.7 per 100 possessions). Thorpe connected on 84.6 percent of his free throws, which ranked No. 1 in the AAC.

Inside the Playbook: Syracuse basketball and its game of zones